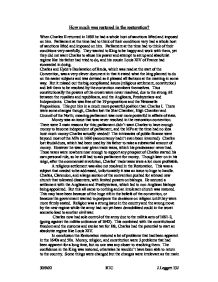 How much was restored in the restoration? - When Charles II returned in 1660 he had a whole host of sanctions lifted and imposed on him.

There were 2 main reasons for this; parliament didn't want Charles to have enough money to become independent of parliament, and the MPs at the time had no idea how much money Charles actually needed! The intricacies of public finance were beyond most of the MPs in 1660 (accountancy hadn't even been invented). Charles lost feudal dues, which had been used by his father to raise a substantial amount of money. However he was now given trade taxes, which his predecessor never had. These taxes were nowhere near enough to support any prospect of Charles started his own personal rule, so he still had to ask parliament for money. Though later on in his reign, after the commercial revolution, Charles' trade taxes were a lot more profitable. ...read more.

This combined with the constitutional freedom and the customs and excise tax for life, Charles had the potential to start an absolutist regime like Louis XIV. In conclusion the Restoration restored a lot of problems that had been apparent in the 1640s and 50s. Money, religion, and constitution were 3 problems that had been apparent for a long time, but no one was any closer to resolving them. The confidence in the King was restored, otherwise he wouldn't have been able to return to the country. Some things were changed but the changes were irrelevant as the main problems of England were not resolved. This period was called a 'revolution' at the time because everything had come full circle and now the king was back and everything was as it should be. But nothing had come full circle because no problems had been solved. 30/9/02 RTC J.Leggett 13J ...read more.