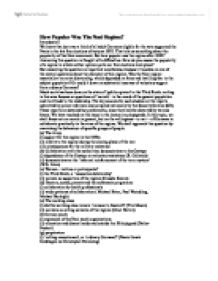 How Popular Was The Nazi Regime?

How Popular Was The Nazi Regime? Introduction We know that just over a third of all adult Germans eligible for the vote supported the Nazis in the last free elections of autumn 1932. That tells us something about the popularity of the Nazi movement. But how popular was the regime after 1933? Answering this question is fraught with difficulties. How do you assess the popularity of a regime in which neither opinion polls nor free elections took place? But answering the question is important nonetheless, because it touches on one of the central questions about the character of this regime. Was the Nazi regime essentially a terrorist dictatorship, which depended on force and instilling fear in the subject population? ...read more.

These reports are detailed but problematic, since they may be distorted by various biases. We have touched on this issue in the lecture on propaganda. In this topic, we shall focus not on morale in general, but on the willingness - or not -- of Germans to collaborate practically in the aims of the regime. We shall approach this question by examining the behaviour of specific groups of people. (a) The Army (i) support for the regime in the 1930s (ii) loyalty to the regime during the closing phase of the war (iii) consequences for the military resistance (b) Collaboration with the authorities: denunciations to the Gestapo (i) ...read more.

(f) German youth (i) expansion of the Nazi youth organizations (ii) alienation and dissent inside and outside the Hitlerjugend (Detlev Peukert) (g) perpetrators (i) `willing executioners', or `ordinary Germans'? (Daniel Jonah Goldhagen vs Christopher Browning) Conclusions: The Nazi regime depended for its success on widespread voluntary collaboration. This was certainly a more important factor in stabilizing the regime than the use of terror, though the latter should not be overlooked. But a distinction should be drawn between an emotional allegiance to the regime and a willingness to collaborate in its work. By the third year of the war, the `popularity' of the regime was in any case irrelevant, because Hitler's policy had placed the German people in a position where the survival of the regime and the survival of Germany itself were one and the same thing. ...read more.