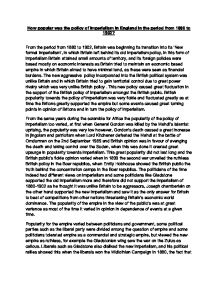 How popular was the policy of Imperialism in England in the period from 1880 to 1902?

How popular was the policy of Imperialism in England in the period from 1880 to 1902? From the period from 1880 to 1902, Britain was beginning its transition into its 'New formal Imperialism', in which Britain left behind its old imperialism policy, in this form of imperialism Britain attained small amounts of territory, and its foreign policies were based mostly on economic interests as Britain tried to maintain an economic based empire in which Britain aimed to have minimal land, as these were seen as financial burdens. The new aggressive policy incorporated into the British political system was unlike Britain and in which Britain tried to gain territorial control due to great power rivalry which was very unlike British policy . This new policy caused great fluctuation in the support of the British policy of imperialism amongst the British public. British popularity towards the policy of imperialism was very fickle and fluctuated greatly as at time the Britons greatly supported the empire but some events caused great turning points in opinion of Britons and in turn the policy of imperialism. From the same years during the scramble for Africa the popularity of the policy of imperialism too varied, at first when General Gordon was killed by the Mahdi's Islamist uprising, the popularity was very low however, Gordon's death caused a great increase in jingoism and patriotism when Lord Kitchener defeated the Mahdi at ...read more.

Although conservative politicians were mostly pro-empire, some politicians like Lord Salisbury had reservations about the new imperialism but were very pro-empire; Salisbury believed that slum toryism was beneath the conservatives. Some radical MP's such as David Lloyd George also believed in the old imperialism more, and he was a great critic of the Boer war and encapsulated the public mood against the war. He also accused chamberlain of profiteering from the Boer war and this and the fact that he rallied about how high the cost of war was caused the public mood to turn against empire. The conservative party saw the great upsurge in popularity of the empire and rebranded themselves as 'party of patriotism', conservatives had periods where popularity of empire was high, such as their Khaki election, but then low popularity during times such as the second Boer War and the failure of the Jameson Raid. The publics opinion towards empire was much more fickle, the media shaped, the public's view greatly for example the right wing press for example 'the daily mail' wholeheartedly backed the empire, and all its readers were partially indoctrinated into believing the empire was the greatest thing for the future of Britain and this caused the British public to support the imperialism. The media saw the British empire as a force for good and writers and editors knew that stories about the empire sold newspapers, which proves just how popular at time, empire was. ...read more.

In addition, the British media stirred up fever against the British army but publishing 'outrages' they had committed, and newspapers that published these stories revealed to the public just how cold the British acts were, and this turned the popularity of empire in the other direction and opinion turned into anti-imperialism around the period of 1900-1902, the low popularity of empire was proved when in 1906 the liberals won the election campaign against the Boer War. The significance of the Boer war was that it turned almost a whole jingoistic nation, against its government and its imperial regime; this turned most of a country against its empire, as it was seen as being un-Christian and unlike Britain. All in all, the general trend of popularity of the British new imperialism and empire was increasing up until about 1900 where it took a steep fall. However, although the majority of people favoured the empire until 1900, this does not nessacerily mean that all the people of Britain liked it as there were many people in the public who were against it not only in the public but as i have mentioned politicians such as William Gladstone. The public had varying views about the policy imperialism at different times, as some . Little changes in the empire could make the public change their mind very easily, which caused a lot of difficulties to the parties and leaders in deciding on new policies. ...read more.