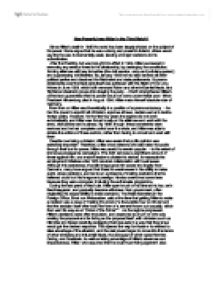 How Powerful was Hitler in the Third Reich?

How Powerful was Hitler in the Third Reich? Since Hitler's death in 1945 the world has been largely divided on the subject of his power. Some argue that he was a strong and powerful dictator; others would say that he was fundamentally weak, leaving all major decisions to his subordinates. After the Enabling Act was brought into effect in 1934, Hitler succeeded in removing any serious threat to his dictatorship, by destroying the constitution, forming alliances with key industries (the civil service, army and judiciary system) and suppressing civil liberties. By January 1934 he had also banned all other political parties and dissolved the Reichstrat and state parliaments. Supreme dictatorship over the Nazi party itself was achieved with the Night of the Long Knives in June 1934, which both removed Rohm and other influential Nazis, and frightened dissident groups into obeying the party - it both strengthened Hitler's control and guaranteed that his power would not come under threat soon. ...read more.

The State Secretary in the Foreign Office, Ernst von Weizsacker, said at the time that getting Hitler to make a decision was a case of 'making the most of a favourable hour or minute' and that the decision itself often took 'the form of a remark thrown out casually, which then went its way as an "Order of the Fuhrer"'i. As the regime progressed, Hitler's decisions were often impulsive, and depended as much on who was making the proposal and its timing as the proposal itself, with ministers such as Himmler and Speer carefully packaging their requests in a way that they knew would get the desired response. This opened the way for those who wished to take advantage of the situation, and the real power began to move into the hands of other ministers and influential Nazis, the strongest of which were Himmler, Goring, and Goebbels. As well as taking advantage of Hitler's absences and impulsiveness, Hitler, who assumed that he could trust their judgement, also granted them a certain amount of freedom. ...read more.

patience for the minutiae of government, hating to read detailed documents.'iii Some elements of both views are correct, but overall Hitler was a strong leader who chose to maintain a removed position. Far from being weak because of his lack of decision-making, this in fact shows his strengths - he had successfully set up a regime that did not need his constant supervision to prosper. Martin Collier and Philip Pedley have remarked that 'However much initiative they were allowed, they [his subordinates] were, until the end, fanatically loyal and always tried to translate his visions into specific policies.'iv Hitler was crucial to the survival of the regime, but his constant input was not needed. When he did involve himself, as has been seen, he was never challenged, and ultimately remained supreme ruler until the end. i Quoted in Hitler, A Study in Tyranny by Alan Bullock ii Quoted in Years of Weimar and the Third Reich, David Evans and Jane Jenkins iii Hitler: A Beginner's Guide, Nigel Rodgers iv Germany 1919-45, Martin Collier and Philip Pedley ?? ?? ?? ?? ...read more.