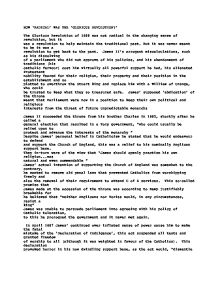 How 'radical' was the 'Glorious Revolution'?

HOW 'RADICAL' WAS THE 'GLORIOUS REVOLUTION?' The Glorious Revolution of 1688 was not radical in the changing sense of revolution, but it was a revolution to help maintain the traditional past. But it was never meant to be it was a revolution to get back to the past. James II's arrogant miscalculations, such as his dissolving of a parliament who did not approve of his policies, and his abandonment of traditions (his catholic fervour) cost him virtually all powerful support he had, his alienated Protestant nobility feared for their religion, their property and their position in the establishment and so plotted to overthrow the Stuart king and replace him with a William of Orange, who could be trusted to keep what they so treasured safe. James' supposed 'abdication' of the throne meant that Parliament were now in a position to keep their own political and religious interests from the threat of future unpredictable monarchs James II succeeded the throne from his brother Charles in 1685, shortly after he called a general election that resulted in a Tory government, "who could usually be relied upon to protect and advance the interests of the monarchy " Despite James' personal belief in Catholicism he stated that he would endeavour to defend and support the Church of England, this was a relief to his nominally Anglican support base. ...read more.

William of Orange, Stadtholder of Holland was the most renowned defender of the Protestant faith in Europe , he was called upon in a radical move by the 'Immortal Seven' to invade England and secure Mary's place as next monarch of England. This conspiracy was indeed a radical one, to actively ask for a foreign power to 'invade' and remove the king was extreme. However there is some debate amongst historians on how many and who amongst the nobility was willing to stand against the king, Professor Kenyon maintains "there importance has been greatly inflated" However a source from the time, an estimate from William's Dutch intelligence in May 1687 indicated that over half of the U.Ks' nobility opposed James' policies, obviously the risk to a member of the nobility for being openly anti-James were huge, owning vast amounts of wealth (especially inherited) and holding a very powerful position of office would of all been lost if one was convicted of treason had William failed to establish himself, but that did not mean they lacked revolutionary sympathies The want of the nobility to replace James with a quasi-invasion from William Orange was itself extremely radical, the nobility knew of the James' close friendship with King Louis XIV who incedently was enemies with William even to the extent of offering French naval ships in a possible struggle with William, made this whole operation extremely precarious and very risky. ...read more.