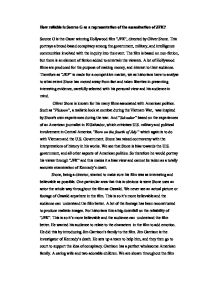 How reliable is Source G as a representation of the assassination of JFK?

How reliable is Source G as a representation of the assassination of JFK? Source G is the Oscar winning Hollywood film "JFK", directed by Oliver Stone. This portrays a broad-based conspiracy among the government, military, and intelligence communities involved with the inquiry into the event. The film is based on non-fiction, but there is an element of fiction added to entertain the viewers. A lot of Hollywood films are produced for the purpose of making money, and interest to their audience. Therefore as "JKF" is made for a competitive market, we as historians have to analyse to what extent Stone has moved away from fact and taken liberties in presenting interesting evidence, carefully selected with his personal view and his audience in mind. ...read more.

We see that Stone is bias towards the U.S. government, and all other aspects of American politics. So therefore he would portray his views through "JFK" and this makes it a bias view and cannot be taken as a totally accurate examination of Kennedy's death. Stone, being a director, wanted to make sure his film was as interesting and believable as possible. One particular area that this is obvious is were Stone uses an actor the whole way throughout the film as Oswald. We never see an actual picture or footage of Oswald anywhere in the film. This is so it's more believable and the audience can understand the film better. A lot of the footage has been reconstructed to produce realistic images. ...read more.

A caring wife and two adorable children. We are shown throughout the film that the investigation is affecting his family life as Garrison is so involved with the examination. The American nation is portrayed as almost scared and arrogant. They don't want to believe that it's possible that the Government could be hiding something about the death of Kennedy or may even be involved. Garrison tries to influence witness to come forward and give evidence in court but most of them decline. They are fearful that they too will get killed by the Government. Like Oswald was, and many other witnesses. I found the film to be useful at presenting the conspiracy view of the American Government. However from a historical point of view, "JFK" isn't entirely accurate. It is biased and does not provide a "full" representation of events and therefore must be treated with caution. ...read more.