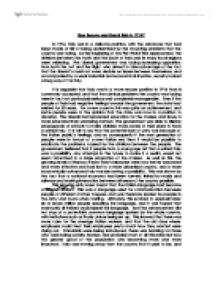 How Secure was Liberal Italy in 1914?

How Secure was Liberal Italy in 1914? In 1914, Italy was in a delicate position, with the advances that had been made at risk of being undermined by the mounting problems that the country was facing. As the beginning of the First World War approached, the divisions between the North and the South of Italy and its many local regions were widening. The Liberal government was facing increasing opposition from both the Left and the Right, who aimed to take advantage of the fact that the Liberal's could not even decide on issues between themselves, and accompanied by a weak industrial and economical situation, security looked a long way off for Italy. It is arguable that Italy was in a more secure position in 1914 than is commonly accepted, and that the obvious problems the country was facing were in fact not particularly serious and completely manageable. Even if the people of Italy had negative feelings towards the government, the state had existed for 50 years. For a new country this was quite an achievement, and some people were of the opinion that the state was now in a position to develop. The Liberals had sponsored education for the masses, and slowly a more educated Italy was being formed. The government was able to display propaganda at schools to make children more aware of their plans to have a united Italy. ...read more.

The opening of the Brenner Pass in 1867 had reinforced this, as although the whole of Italy since it now linked to the economic markets of Europe, it was far more beneficial to the North and allowed further increases in the condition of the North Italian economic situation. Instead of improving the situation, the removal of the internal trading tariffs by the government in fact worsened the position. The South was now able to purchase more advanced products from the North instead of the less advanced products made by the South, potentially putting the few businesses in the South out of business. In conjunction with the North-South divide, there were also many more divisions throughout the country in the form of local communities. Due to the fact that Italy had not long been unified, people still felt only loyalty to their region and not to the country as a whole. This is known as parochialism, and was certainly a problem that if not removed would stop Italy from advancing at any stage in the near future, Following Italy's unification, a constitutional government was formed like that of Great Britain's. This then begs the question, why was Italy so politically unstable? The answer - Italy was unable to form democratic traditions because of the corruption found within the political parties. ...read more.

The Nationalists felt that Italy had lost all sense of pride, and vowed to increase unity, authority and military action throughout the country. The Futurists also wanted an increase in national unity, but also felt modernisation and cultural advancement were important themes. With all of these different views and ambitions for the future, it was going to be hard for anybody to set about improving Italy in a way that was beneficial for all. The conflicting ideas meant it was difficult for the public to decide on what was best to better Italy. Leading on from this, an unstable government had been a key aspect of Italy since its unification. The Liberals were unable to keep a Prime Minister, and with the make up of the government continually changing it was difficult for anybody to set about securing Italy's future. To conclude, Italy's condition in 1914 was clearly insecure, and there was a long way to go for Italy to become the Nation that many wanted it to be. Whether it be the weak and problematic government, the divides between North and South as well as individual local regions, the growing political opposition or Italy's weak industrial and economic position, Italy had a long way to go before it was "secure". Coupled with a resentful Church, high death rates and weak workforce the future of Italy was by no way certain, and would take a lot to bring the security that the vast amount of the Italian population desired. ...read more.