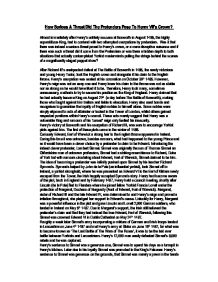 How serious a threat did the pretenders pose to Henry VII's crown?

How Serious A Threat Did The Pretenders Pose To Henry VII's Crown? Almost immediately after Henry's unlikely success at Bosworth in August 1485, the highly superstitious King, had to contend with two attempted usurpations by pretenders. Was it that there was indeed a serious threat posed to Henry's crown, or a mere disruptive nuisance and if there was such a threat did it come from the Pretenders or was there a hidden depth to both situations that actually contemplated Yorkist masterminds pulling the strings behind the scenes of a magnificently staged puppet show? After Richard III's unexpected defeat at The Battle of Bosworth in 1485, the newly victorious and young Henry Tudor, took the English crown and alongside it his claim to the English throne. Henry's usurpation was sealed at his coronation on October 30th 1485. However, Henry's reign was not an easy one and Henry knew his claim to the throne was not as stable nor as strong as he would have liked it to be. Therefore, Henry took many, sometimes unnecessary, methods to try to secure his position as the King of England. Henry claimed that he had actually become King on August 21st (a day before The Battle of Bosworth), making those who fought against him traitors and liable to execution. Henry also used bonds and recognises to guarantee the loyalty of English nobles to himself alone. ...read more.

As a deterrent to others Henry attained and confiscated the lands of 28 nobles who fought against him in the Battle of Stoke. Henry never again faced an army composed of his own subjects on English soil. However, the fact that such a ridiculous scheme almost succeeded and a re-enactment of Bosworth was a possibility with Henry in the place of Richard III, suggests that the country was still unsettled and highlights what a fragile grasp Henry had on the crown. It was no coincidence that on November 25th 1487, Henry belatedly crowned Elizabeth (originally a Yorkist) an act meant to unite people's goodwill and secure the unification of Yorkists and Lancastrians. The next conspiracy against Henry VII was to last for nearly ten years and caused the King much angst. In 1491, a young servant of a Breton merchant was wondering the streets of Cork in Ireland, displaying his master's fine products. He bore a striking resemblance to Edward, Earl of Warwick, however denying he was the Earl of Warwick he 'changed' into Richard, Duke of York. The young prince Richard was the younger son of Edward IV who had supposedly been murdered in the Tower of London, along with his elder brother Edward. Consequently began the adventures of Perkin Warbeck. Originally, it was thought that Warbeck came from Tournai in Flanders. It was likely that he had already been 'discovered' by Margaret of Burgundy and she had decided to send the young man to Ireland, always a centre for Yorkist plots. ...read more.

The weakness of his claim to the throne and the usurpation of Richard III left Henry vunerable to attack, when Henry himself was insecure and wary of his own claim to the throne. Warbeck especially proved a threat to Henry, as he was supported abroad, this was bad timing for Henry as Warbeck provided doubt for the foreign policies Henry was trying to secure, with influential countries, such as Spain. On the other hand, Henry dealt well with the situation once in his control quickly and took decisive action on the pretenders, as Anderson observed; ", it is noticeable that when Warbeck appeared, his support was principally from outside England and his two attempts to invade both failed miserably". This shows that Henry was capable of establishing himself and the monarchy, by the time the Pretenders attacked. Also, as Guy explains; "The most important revolt in Henry VII's reign, the Cornish uprising of 1497, was not dynastic." Therefore displaying the fact that Henry had other factors to take into consideration when discussing the threat to his crown, rather than simply the threat posed by pretenders to the throne. The Cornish uprising was caused by Henry himself and so proved that Henry needed to focus on his own leadership skills and gaining support from the people within England would be his next difficult but cope able challenge. Katie Furnell- 12CUR ...read more.