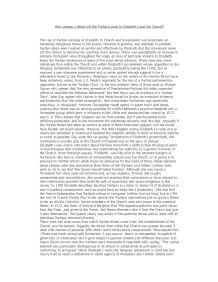 How serious a threat did the Puritans pose to Elizabeth I and her Church?

Top of Form How serious a threat did the Puritans pose to Elizabeth I and her Church? The rise of Puritan ideology in Elizabeth I's Church and Government was potentially an extremely dangerous threat to her power. However in practice, any attempts to promote Puritan ideas were crushed so quickly and effectively by Elizabeth that the movement never got the chance to develop into anything more serious. There was undoubtedly an increase in extreme Protestant views throughout her reign, an area of particular concern to Elizabeth being the Puritan tendencies of some of her most senior advisors. There were also some individuals from within the Church and within Elizabeth's government whose opposition to the Religious Settlement was influential to an extent, particularly during the 1570s, but all received a zero tolerance punishment and so never gained enough support to be a substantial threat to the Monarchy. Historians' views on the extent of the Puritan threat have been extremely varied, from J. E. Neale's argument for the rise of a Puritan parliamentary opposition, known as the 'Puritan Choir', to the less extreme views of those such as Michael Graves who agreed that 'the new generation of Presbyterian-Puritans did make concerted efforts to demolish the Religious Settlement', but that there was no evidence of a 'Puritan Choir'. John Guy agrees with Graves in that Neale based his theory on irrelevant evidence, and maintains that 'the wider assumption...that mainstream Puritanism was potentially anarchical...is misguided'. However Christopher Haigh seems to agree more with Neale, claiming that 'there was an obvious potential for conflict between a practical Elizabeth and a Protestant group which grew in influence in the 1560s and dominated her council by 1572' and G. R. Elton argues that 'England was far from puritan, but it was becoming more definitely protestant, and in this movement the extremists naturally took the lead'. Arguably if the Puritan threat had been as serious as some of these historians suggest, civil war would have broken out much sooner. ...read more.

However, Warren downplays the influence of John Field's Admonitions to Parliament, claiming that 'the vehemence of his opinions and the savagery of the attack on the bishops appalled many Puritans. The impact on Parliament was slight'. In 1575 Edmund Grindal- a Puritan- was made Archbishop of Canterbury. Elizabeth I ordered him to repress prophesying- meetings of clergy to practice preaching, but when Grindal refused on the grounds that they were useful for the Church he was directly disobeying the Queen and so had to be dealt with harshly. He was willing to apply 'Adiaphora' and use his position to reform the Church but he was clearly trying to exert too much influence over Elizabeth. Somerset argues that 'if Grindal had pretended he would do as she wished, and had then evaded her orders, the odds are that Elizabeth would shortly have forgotten about the matter, but as it was, he decided on a direct confrontation with the Queen.'. The fact that 'Grindal had in effect repudiated the Royal Supremacy' meant Elizabeth had no choice but to deal with it that way. Neale claims that after the prophesying 'aided by... John Field... the Presbyterian movement grew instead of diminishing in strength...', but Warren contests that it was much less of a threat, arguing that 'the Queen had little real cause to fear prophesying as a factor stimulating disunity'. While it is arguable that the Queen overreacted in removing Archbishop Grindal from his position of responsibility, it did serve to show that she considered it a serious threat to her authority, and therefore was a warning to others inclined to do the same. While Grindal was in disgrace, the Bishop Aylmer of London was in charge of eradicating non conformity. Under his supervision the ecclesiastical commission in charge of the Act of Uniformity and Oath of Supremacy had become very strong, with increased powers to imprison or fine. ...read more.

Elton agrees with this saying 'He had been presumptuously rude by the standards of the time, but no more so than Puritans thought it right to be...Sir Francis Walsingham, frequently lectured the queen....' Peter Turner headed the 'Bill and Book' campaign in the 1584-1585 parliament, to replace the Book of Common Prayer with the Genevan Prayer Book and the Anglican system of Church government with a Calvinist model. Although Neale thought that this proved the Puritans were becoming more organised and succeeding in making difficulties for the government, Graves maintains that Neale's claims were nothing more than supposition and the Puritan campaigns in the Commons were mounted by 'a handful of members, lacked general parliamentary sympathy or support, and were easily smothered by official action'. In conclusion, the Puritans from within both the Church itself and from within Parliament posed a potentially extremely dangerous threat to Elizabeth I and her Church. However, due to the fact that the Queen did not tolerate any non-conformists, the movement was never allowed to gain any momentum. Guy and Doran praise Elizabeth's reaction to it, Guy arguing that 'Elizabeth succeeded to a remarkable extent in preserving a firm separation of church and state....' and 'within 10 years the Elizabethan puritan 'movement' was dead...the collapse in 1586-7 of a final Presbyterian attempt to abolish bishops... epitomizing the defeat' and Doran agrees to an extent that while 'nonconformity could not be eradicated...'in general 'religion ceased to be a major divisive issue at both the national and the local level during the last decade of the reign'. However Warren and Elton argue that it was not Elizabeth's skill in dealing with the situation but the unskilfulness of the Puritans, Warren saying, 'the Presbyterian threat was no real threat at all' and 'Puritans failed to change the organisation and hierarchy of the church'. and Elton saying that 'Elizabethan Puritanism was past its peak...(it) had entered upon a decline which made it... a permanent minority opposition outside the church' Bottom of Form ...read more.

This is a well written response and the author clearly has strong understanding and knowledge about the nature and success of the Puritan threat, reaching a logical conclusion. However, the overuse of historiography has weakened the response since the author's own opinion is not clear. 4 out of 5 stars.