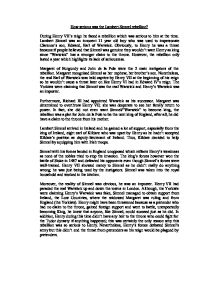 How serious was the Lambert Simnel rebellion?

How serious was the Lambert Simnel rebellion? During Henry VII's reign he faced a rebellion which was serious to him at the time. Lambert Simnel was an innocent 11 year old boy who was used to impersonate Clarence's son, Edward, Earl of Warwick. Obviously, to Henry he was a threat because if people believed that Simnel was genuine they wouldn't want Henry as king since "Warwick" has a stronger claim to the throne. However, the rebellion only lasted a year which highlights its lack of seriousness. Margaret of Burgundy and John de la Pole were the 2 main instigators of the rebellion. ...read more.

In fact, she did not even want Simnel/"Warwick" to become king, the rebellion was a plot for John de la Pole to be the next king of England, after all, he did have a claim to the throne from his mother. Lambert Simnel arrived in Ireland and he gained a lot of support, especially from the king of Ireland, eight earl of Kildare who was upset by Henry as he hadn't accepted Kildare's position as deputy-lieutenant of Ireland. Thus, Kildare decided to help Simnel by equipping him with Irish troops. Simnel with his forces landed in England unopposed which reflects Henry's weakness as none of the nobles tried to stop the invasion. ...read more.

Although, the Yorkists were claiming Henry's Warwick was fake, Simnel managed to obtain support from Ireland, the Low Countries, where the widowed Margaret was ruling and from England (the Yorkists). Henry might have been threatened because as a pretender who had no claim to the throne, gained foreign support and went to battle, unexpectedly becoming King, he knew that anyone, like Simnel, could succeed just as he did. In addition, Henry during this time didn't have any heir to the throne who could fight for the Tudor dynasty if anything happened; this was certainly the only reason why this rebellion was so serious to Henry. Nevertheless, Henry's forces defeated Simnel's army but this didn't end the threat from pretenders as his reign would be plagued by pretenders. ...read more.