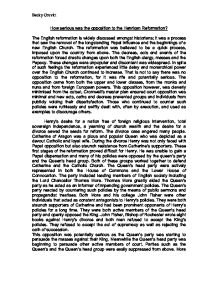 How serious was the opposition to the Henrican Reformation?

How serious was the opposition to the Henrican Reformation? The English reformation is widely discussed amongst historians; it was a process that saw the removal of the longstanding Papal influence and the beginnings of a new English Church. The reformation was believed to be a quick process, imposed upon the country from above. The decrees, acts and events of the reformation forced drastic changes upon both the English clergy, masses and the Papacy. These changes were unpopular and discontent was widespread. In spite of such feelings the reformation experienced little delay and monarchical power over the English Church continued to increase. That is not to say there was no opposition to the reformation, for it was rife and potentially serious. The opposition came from both the upper and lower classes, from the monks and nuns and from foreign European powers. This opposition however, was cleverly minimised from the outset, Cromwell's master plan ensured court opposition was minimal and new acts, oaths and decrees prevented groups and individuals from publicly voicing their dissatisfaction. Those who continued to counter such policies were ruthlessly and swiftly dealt with, often by execution, and used as examples to discourage others. ...read more.

It was the act of Succession that was met within court with fierce opposition. The act meant that it was to be made treason if any person denied that Henry was the Supreme head of the English Church and said or wrote anything against his present marriage or his lawful heirs. This act also denounced the power of the Pope, undoubtedly worsening the already fragile relationship between the English monarch and the Papacy. 'There was never such a striking at the passage of any act in the lower house' ( J. Guy 1988). Notwithstanding the resistance of the Commons the act passed with little delay. The pressure from above was immense, Parliament at this time were given more freedom and possessed more power. In addition Cromwell, Henry's chief minister had made it virtually impossible for concerted opposition to form. The opposition was eliminated before they acted as a focus for wider discontent. It is evident that Cromwell had successful managed to minimize opposition from the small isolated groups within court. There were however individuals who persistently angered the King and his minister. It was Henry's divorce, the Act of Supremacy and the break with Rome that imposed huge changes on English society and angered individuals. ...read more.

It is evident that opposition to the Henrican reformation was potentially serious. This is by virtue of the facts that potentially the king could have faced a battle on home soil against the rebels of the pilgrimage of grace that was by far the largest army. In addition court factions were working relentlessly to undermine monarchical authority and were continuing to gain support. Such opposition was also given further momentum by individuals such as More, Fisher and Barton who created effective propaganda for the Queen's cause. Although the opposition was potentially serious it mounted to very little. Henry and Cromwell ensured that these small isolated pockets of discontent both inside and outside of court were eliminated and that persistent defiant individuals were executed. In addition the Pilgrimage of Grace amounted to nothing as the rebels did not wish to battle, in addition the King's promise to offer pardons and restore some monasteries appealed to the rebels. It can therefore be concluded that although the opposition to the Henrican reformation was rife it posed little threat to Henry thanks to the quick response and actions of Cromwell who pinned down opposition in its early stages. Becky Grevitt ...read more.