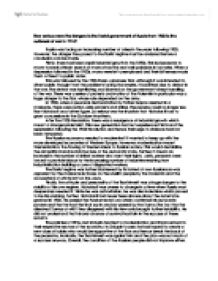 How serious were the dangers to the Tsarist government of Russia from 1900 to the outbreak of war in 1914?

How serious were the dangers to the Tsarist government of Russia from 1900 to the outbreak of war in 1914? Russia was facing an increasing number of crises in the years following 1900. However, the danger they posed to the Tsarist regime must be analyzed before a conclusion can be made. Firstly, there had been rapid industrial growth in the 1890s. This led peasants to move towards cities in search of more attractive and well-paid jobs in factories. When a depression followed in the 1900s, many were left unemployed and their bitterness made them a threat to public order. This was followed by the 1905 Russo-Japanese War. Although it was intended to divert public thought from the problems facing the empire, it backfired due to defeat in the war. ...read more.

This would destabilize the old political and social structure of the autocratic state. Further, it meant an increase in the number of skilled workers who want their rights. Lastly, peasants were forced to provide labour for the increasing number of industries resulting from industrialization building a core of disgruntled workers. The Tsarist regime was further blackened by its hatred of non-Russians as was apparent by the massacre let loose on the Muslim people by the Cossacks and the accusations of witchcraft on the Jews. Finally, the attitude and personality of the Tsar himself was a huge danger to the stability of his own regime. Nicholas II was averse to change in a time when Russia most desperately needed it. While he was authoritarian, he was also indecisive which proved to be his undoing. ...read more.

Most radical groups were ineffective because they were so divided amongst themselves. The Bolsheviks were in either external or self-imposed exiles. The Tsar, on Witte's advice, successfully divided the middle class and peasantry by granting facile concessions such as the Dumas and abolishing redemption tax while crushing the proletariat who were left standing alone. It is clear from this that the revolution was aimed not at overthrowing the Tsar and establishing a new order but only to get concessions. To conclude, although some historians feel that revolution was inevitable, I think that until 1914, the start of the World War, the dangers to the Tsar were not particularly threatening. Even in 1905, the Tsar could rely on the army to crush the protesting proletariat. The fact is that so long as an autocratic ruler has a strong police force and can rely on support of the army, he can not be ousted from power that easily. ...read more.