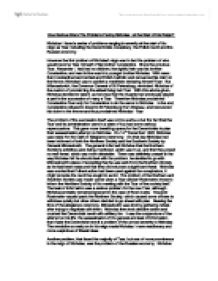 How Serious Were The Problems Facing Nicholas I at the Start of His Reign? Nicholas I faced a series of problems ranging in severity at the start of his reign as Tsar, including the Decembrists conspiracy, the Polish revolt and the Russian economy. However the first problem of Nicholas' reign was in fact the problem of who would become Tsar, himself of his brother Constantine. Since the previous Tsar, Alexander I, had had no children, the rightful heir was his brother Constantine, and next in line was his younger brother Nicholas. With news that Constantine had married and Polish Catholic and renounced his claim to the throne, Nicholas' was to publish a manifesto declaring himself Tsar. But Milaroadovich, the Governor General of St Petersburg, reminded Nicholas of the custom of proclaiming the eldest living heir Tsar. With this advice given, Nicholas decided to take it, as he knew that the Guards had previously played a part in the succession of many a Tsar. Therefore Nicholas proclaimed Constantine Tsar only for Constantine to do the same to Nicholas. ...read more.

Nicholas was worried that if direct action had been used against the conspirators, it might provoke the revolt he sought to avoid. The problem of the Northern and Southern Society was made worse when a Tsar adviser Rostovstev chose to inform the Northern Society of his meeting with the Tsar of the society itself. The leak of information was a serious problem for the new Tsar, although Nicholas probably remained ignorant in the case of Rostovstev. However Rostovstev caused panic the Northern Society, which caused some officers to withdraw quietly but other others decided to go ahead with plan. Nearing the time of the allegiance ceremony, Miloradovich was shot by gathering rebels after trying to negotiate with them. Nicholas then took decisive action and crushed the Decembrist revolt with artillery fire. It was the conjuncture of the attempt on his life; the assassination of his general and leak of information that made the Decembrist revolt a problem of the utmost severity to Nicholas. The revolution so early on in his reign made Nicholas I more reactionary and more suspicious of liberal ideas. ...read more.

It was in November 1830 when the revolutionary ideas hit Poland and the Poles rose in revolt against their Russian overlords. Constantine, Nicholas' brother, had failed to contain the situation and the revolutionaries had the support of the Polish army. It was nine months until the revolution was suppressed, and the uprising cost many Russian lives, including Constantine's who died of cholera. Nicholas thought it best to revoke the constitution and replace it with a much more restrictive statute. Universities at Warsaw and Vilna were closed and from then on until the death of Nicholas, Poland was ruled under martial law and the administration was place under greater Russian control. Nicholas aimed to "russify" Poland, and to impose Russian ways, institutions and beliefs and eradicate the local customs, institutions and beliefs. All in all, Nicholas I faced some very serious problems at the start of his reign in 1825, right from the day he was proclaimed Tsar. It was these incidents at the beginning of his reign such as the Decembrist Revolution and the Polish Revolt that made Nicholas a very reactionary Monarch in the later years of his reign. ...read more.