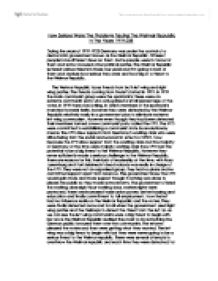 How Serious Were The Problems Facing The Weimar Republic In The Years 1919-23?

How Serious Were The Problems Facing The Weimar Republic In The Years 1919-23? During the years of 1919-1923 Germany was under the control of a democratic government known as the Weimar Republic. Different people have different views on them. Some people were in favour of them and some favoured other political parties. The Weimar Republic suffered various threats in these four years and I'm going to look at them and analyse how serious they were and how big of a threat to the Weimar Republic. The Weimar Republic faces threats from both left wing and right wing parties. The threats coming from the left started in 1919. In 1919 the main communist group were the spartacists; these were an extreme communist party who only gained a small percentage of the votes. In 1919 there was a rising, in which members of the spartacists marched towards Berlin, however they were defeated by the Weimar Republic relatively easily in a government plan to eliminate extreme left wing communism. However even though they had been defeated their members formed a new communist party called the KPD. The KPD were committed to establishing a communist state by revolutionary means. The KPD drew supports from Germany's working class who were still suffering from the social and economic effects of WW1. Now because the KPD drew support from the working class and the majority of Germany at the time were majority working class they KPD had the potential to be a big threat to the Weimar Republic. ...read more.

The Weimar Republic were always going to win against the left wing groups, even if they had to use the right wing parties and the right wing Freikorps, which they did on a number of occasions. Throughout 1919-23 the German government was focussed on the threat from the left, when however it was the threat from the right whose influence became particularly strong in these four years. The right wing parties favoured anti-democracy, anti-communism, authoritarianism and nationalism. These were parties such as the DNVP which was the Deutschnationale Volkspartei (German National Peoples Party), this party attracted support from the upper class nationalist and racist people. They gained up to 20% of the votes over the years, this may not sound like a lot but it was considering only 70-80% of people voted. They favoured anti-democracy which was a big problem because the Weimar Republic were completely in favour of democracy. They believed it to be weak and they blamed them for losing the war and all of the reparations Germany had to pay after the treaty of Versailles. However they hated communists more, so whenever a communist uprising started they would help the government defeat it. They saw the Weimar Republic as the lesser of two evils. Their Nationalist views came in two forms, mild and strong views. ...read more.

People couldn't afford a loaf of bread to live on. This made the German people resent the Weimar republic, they blamed them for everything that had gone wrong. Hyperinflation induced poverty, made people unsure about their own finances and those who had savings stored away found that their savings had been wiped out. There was only one good side to hyperinflation and that was that those with mortgages and debts could pay them off extremely easily. Although hyperinflation was extremely bad, one year later Germany was once again one of the biggest superpowers. They did this by introducing new currency with limits on how much could be printed and put a limit on government spending. There were various threats to the Weimar Republic over these four years and yet somehow they managed to survive and then enter what was known as the golden years. The threats at times were big and at times were small, but none of the threats were big enough to revolutionise Germany, each time there was an attempt it was squashed by the government. People were happy to settle for the Weimar republic because they believed that they were better than either the communists or the Nationalists, depending on which they were themselves. There is no way the Weimar republic would have survived if it wasn't for the support of one side when the other attempted to revolutionise. The threats were small in comparison to the size of the Weimar Republic, although not everybody liked them everybody preferred them to the opposite wing. ...read more.