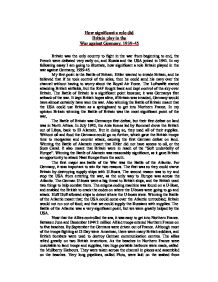 How significant a role did Britain play in the War against Germany, 1939-45

How significant a role did Britain play in the War against Germany, 1939-45 Britain was the only country to fight in the war from beginning to end, the French were defeated very early on, and Russia and the USA joined in 1941. In my following essay I am going to illustrate, how significant a role Britain played in the war against Germany, 1939-45. My first point is the Battle of Britain. Hitler wanted to invade Britain, and he believed that if he took control of the skies, then he could send his navy over the channel without having to worry about the Royal Air Force. The Luftwaffe started attacking British airfields, but the RAF fought back and kept control of the sky over Britain. The Battle of Britain is a significant point because; it was Germanys first setback of the war. It kept British hopes alive, if Britain was invaded, Germany would have almost certainly have won the war. ...read more.

Huff Duff allowed ships to detect where the U-boats were. Winning the Battle of the Atlantic meant that; the USA could come over the Atlantic untroubled; Britain would not run out of food; and that we could supply the Russians with supplies. The Battle of the Atlantic was a very significant point, but we were greatly helped by the USA. Now that the Allies controlled the sea, it was easy to get into Northern France. Between June and December 1944 2 million Allied troops entered Northern France on to five beaches. By September the Germans were driven out of France. Although most of the troops fighting at D-Day were American, there were many British soldiers, and British bombers were used to destroy German communication centres. The allies relied greatly on two British inventions. As the beaches in Northern France were unsuitable to land troops and supplies, two huge portable harbours were made, called the Mullberry Harbours. They were taken across the channel in pieces and assembled on the beaches. ...read more.

If Germany had controlled the Atlantic, it would have been unlikely that the Americans would have joined the war, as it would have been very difficult to get over to Europe. However Russia lost so many men to the war effort, it is impossible to count. In addition, their victories at Starlingrad and Kursk were two of the most important of the whole war. Having a war on two fronts, made things very difficult for Hitler, which is probably why they lost. Without the help of the Russians, maybe Britain would never have won. Nevertheless, this could be said the other way. Germany put 80% of their planes to fight the war against Britain, and the Russians maybe wouldn't have won Starlingrad. In addition to the Russian effort, the help of the USA was vital. Britain was helped at The Battle of the Atlantic, D-Day and with all the bombing. Also as the Americans fought the Japanese, it left Britain to concentrate on fighting the Germans. Britain did play a very significant role in winning the war, but in my opinion Russia played a much bigger one. 1071 words. ...read more.