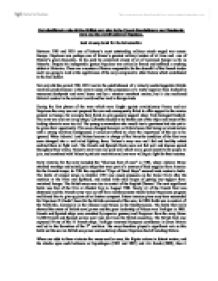 How significant a role did the British navy play in the French Revolutionary and Napoleonic wars and the overall defeat of Napoleon.

How significant a role did the British navy play in the French Revolutionary and Napoleonic wars and the overall defeat of Napoleon. look at essay bank for the introduction Between 1793 and 1815 one of history's most outstanding military minds waged war across Europe. Napoleon was perhaps one of France's greatest military leaders of all time and one of History's great characters. At his peak he controlled almost of all of mainland Europe as far as Moscow. Despite his indisputable genius Napoleon was critically flawed and suffered a crushing defeat at Waterloo. There are a number of factors responsible for the downfall of the French leader and I am going to look at the significance of the navy compared to other factors which contributed to the final defeat. Not only did the period 1793-1815 lead to the establishment of a virtually unchallengeable British maritime predominance in the narrow sense of the possession of a vastly superior fleet, backed by numerous dockyards and naval bases and by a massive merchant marine; but it also confirmed Britain's control in the colonial world and her lead in foreign trade During the first phases of the wars which were fought against revolutionary France and not Napoleon the navy was not prepared for war and consequently failed to offer support to the armies present in Europe, for example they failed to give gunnery support when York besieged Dunkirk. ...read more.

French and Spanish ships were smashed by superior gunnery and firepower from the navy. Some 14,000 French and Spanish sailors were lost, ten times the British casualties. The British fleet also captured 19 out of the 33 French ships. Trafalgar renewed European confidence in Great Britain and led to the formation of the 3rd coalition. The navy therefore played a significant role as this battle set the seal on British sea power and ended any chance Napoleon had of invading Britain. When one adds to these victories the many smaller ones, the frigate actions in distant waters, and the attacks upon such harbours as Copenhagen (1801 and 1807) and Aix Roads (1809), then it scarcely suprising that the Nelsonic period has been regarded as the high point of British naval history. It is perhaps a tribute to the strength of the Britain's Navy and economy, that Napoleon introduced the ambitious Continental System. Under the Berlin Decrees of 1806, all ports under French control were to reject British trade. Although initially British exports fell by 25%, the dominance of the Royal Navy meant that the blockade could never be fully implemented. Trading simply continued as Britain exported to Europe through Portugal, along the Baltic coast. This once again showed the significance of having a strong navy in terms of maintaining trade and therefore being able to keep the armies and navy fighting against Napoleon. ...read more.