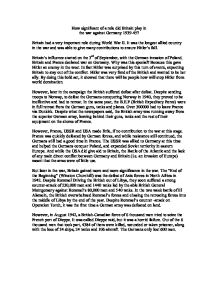 How significant of a role did Britain play inthe war against Germany 1939-45?

How significant of a role did Britain play in the war against Germany 1939-45? Britain had a very important role during World War II. It was the longest allied country in the war and was able to give many contributions to ensure Hitler's fall. Britain's influence started on the 3rd of September, with the German invasion of Poland. Britain and France declared war on Germany. Why was this special? Because this gave Hitler an enemy in the west. In fact Hitler was surprised by this turn of events, expecting Britain to stay out of the conflict. ...read more.

Over 300000 had to leave France via Dunkirk. Despite what the newspapers said, the British army was running away from the superior German army, leaving behind their guns, tanks and the rest of their equipment on the shores of France. However, France, USSR and USA made little, if no contribution to the war at this stage. France was quickly defeated by German forces, and while resistance still continued, the Germans still had a good time in France. The USSR was allied to Germany at this time and helped the Germans conquer Poland, and expanded Soviet terriority in eastern Europe. ...read more.

In the two week battle of El Alamein, the British overwhelmed Rommel's forces and chasing the retreating forces into the middle of Libya by the end of the year. Despite Rommel's counter -attack on Operation Torch, it was the first time a German army was defeated on land. However, in August 1942, a British-Canadian force of 6 thousand men tried to seize the French port of Dieppe. It was called Dieppe raid, but it was a horrid failure. Out of the 6 thousand men that took part, 4384 of them were killed, wounded or taken prisoner, along with the loss of 34 ships, 24 tanks and 106 aircraft. The Germans only lost 600 men. ...read more.