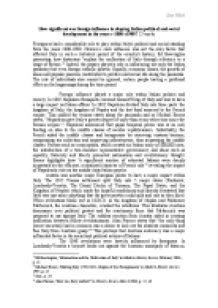 How significant was foreign influence in shaping Italian political and social development in the years c-1800-c1900?

﻿Sam Webb How significant was foreign influence in shaping Italian political and social development in the years c-1800-c1900? 25 marks Foreigners had a considerable role to play within Italy's political and social standing from the years 1800-1900. However, such influence was not the only factor that affected Italy in such a turbulent period of the country's history, Ed Beavington presenting how historians "explain the unification of Italy through reference to a range of factors."[1] Indeed, the papacy played a role in influencing not only the Italian peasantry but even foreign catholic powers. Equally, economic issues, the growth of ideas and popular pressure contributed to politics and social life along the peninsula. The role of individuals also cannot be ignored, certain people having a profound effect on the happenings during the time period. Foreign influence played a major role within Italian politics and society. In 1805 Napoleon Bonaparte crowned himself King of Italy and was to have a large impact on Italian affairs. In 1810 Napoleon divided Italy into three parts: the kingdom of Italy, the kingdom of Naples and the last third annexed to the French empire. This unified the various states along the peninsula and as Michael Broers states, "Napoeleon gave Italy a greater degree of unity than at any other time since the Roman empire."[2] Napoleon announced that papal temporal power was at an end, feeding an idea to the middle classes of secular republicanism. Industrially, the French aided the middle classes and bourgeoisie by removing customs barriers, reorganising tax collection and improving infrastructure, thus impressing the middle classes. ...read more.

In 1864, the Pope condemned the liberal movements emanating from Piedmont which "shocked many Catholics- although it was loudly applauded by the conservatives in the Church."[10] Liberal politicians would have to totally re-evaluate their strategy with a resistant Pope stirring Catholics across the peninsula to reject any form of Italian independence. After King Victor Emmanuel II had taken Rome and completed unification, Pius refused to recognise the new state as well as rejecting Piedmont's Law of Guarantees. As Kertzer puts it, "the continuing hostility of the pope made consolidation of [the new state's] rule more difficult, for it was an impediment to both gaining allegiance of their own population and winning recognition from foreign governments."[11] Catholics were told not to vote within the new Italian state, a move that reveals the hindrance the papacy caused towards political progress within Italy. Also, foreign catholic powers such as France would be reluctant to support the new state if the papacy was so strongly opposed to Italy. Therefore, as an alternative reason to foreign influence, the Church can be seen as significant on two terms. Before 1848 Pius aided in an explosion of liberalism, revolutionary hopefuls encouraged to act from the policies of the pope. On the other hand, the Church is also important regarding political and social development due to its reactionary conservatism after the 1848 revolutions, making progress considerably slower for Italian liberals. Just as the role of Pius IX, individuals also had an important role on politics and society. ...read more.