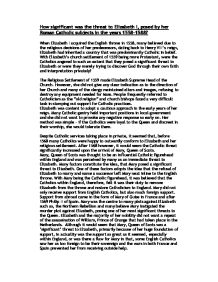 how significant was the catholic threat to elizabeth 1, posed by her roman catholic subjects in the years 1558-1588

How significant was the threat to Elizabeth I, posed by her Roman Catholic subjects in the years 1558-1588? When Elizabeth I acquired the English throne in 1558, many believed due to the religious decisions of her predecessors, dating back to Henry VIII's reign, Elizabeth had inherited a country that was predominantly Catholic in belief. With Elizabeth's church settlement of 1559 being more Protestant, were the Catholics angered to such an extent that they posed a significant threat to Elizabeth or were they merely trying to discover God through their own faith and interpretation privately? The Religious Settlement of 1559 made Elizabeth Supreme Head of the Church. However, she did not give any clear indication as to the direction of her Church and many of the clergy maintained altars and images, refusing to destroy any equipment needed for Mass. People frequently referred to Catholicism as the "old religion" and church bishops faced a very difficult task in stamping out support for Catholic practices. Elizabeth was content to adopt a cautious approach in the early years of her reign. Many Catholic gentry held important positions in local government and she did not want to provoke any negative response so early on. Her method was simple - if the Catholics were loyal to the Queen and discreet in their worship, she would tolerate them. ...read more.

On the one hand, this was only a perceived and merely potential threat as the governmental reaction was so swift in dealing with the participants and never resulted in any change to Elizabeth's prestige. There was also little enthusiastic support from English Catholics for the rebellion. However on the other hand, on this occasion only, troops had to be used by Elizabeth to defer the rebels, not only this but the support from the nobility was a very significant threat as their own reasons behind rebellion were not purely religious and so Elizabeth had to be careful to tactfully suppress the nobles power and control to prevent further and potentially more successful rebellions in the future. There were four main groups of Catholics within England during Elizabeth's reign and each group posed it's own threat to Elizabeth. Church Papists were the majority of the Catholics in England, this group was loyal to Elizabeth and accepted her as Head of the Church but were conservative and disliked radical change. They were not a serious threat to Elizabeth and were happy to outwardly conform, as long as, Elizabeth recognised their private worship. Recusants made up 1/3 of the nobility and a sizeable section of the gentry. Recusants were a slightly more extreme branch of Catholicism, than Church Papists, they refused to attend Church services and withdrew themselves completely from the established Church. ...read more.

Catholic support was never fully received from foreign powers either, due to wars in their own countries, there is also evidence of this in foreign reactions to Mary's execution in 1587 and after Mary's execution there was never a rebellion during Elizabeth's reign again. It is evident that the Catholic threat was indeed more significant than that of the Puritans but that is due to the settlement being more adhered to Protestantism and the fact that the Catholics were willing to die for their beliefs, however, there were only 39 recorded deaths of Catholic priests, so in actuality were the cries of martyrdom real on merely a mechanism of intimidation. Therefore, I would conclude that on the one hand the Catholic threat was merely a perceived threat and never gained enough Catholic support or leeway from the government to ever develop into anything more than an ideology for England, but on the other hand it is essential to understand, that to Elizabeth and her government at the time the Catholics posed a very significant and real threat due to its spread through the nobility and the government reaction from early reign leniency to later reign ruthlessness shows just how serious they believed the threat to be. Perhaps if it were not for difficult circumstances abroad and the tough action displayed by Elizabeth the Catholics would have been given the opportunity to overthrow Elizabeth and convert England back to Catholicism. Katie Furnell - 13CUR ...read more.