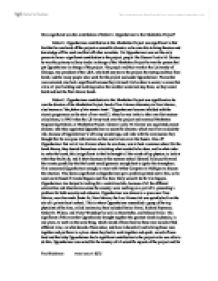 How significant was the contribution of Robert J. Oppenheimer to the Manhattan Project?

He was the key leader to the project as he took a slow paced poorly coordinated, theoretical and laboratory research effort of a few universities, into the fast paced highly articulated, truly massive juggernaut involving thousands of scientists, engineers, technicians, workmen, and soldiers, as well as hundreds of companies and governmental organizations in the United States and the World. This is way Groves was more significant to the project then Oppenheimer was as he changed it from a slow paced project not getting much done, to the project that everyone know it as this big project working as quickly as possible to build the bomb and finish the war. The work of the University of Chicago was significant at the start of the project, as their work in a small laboratory as this is where Stagg Field were expanding understanding of atomic theory , the first controlled nuclear reaction occurred. Though at the time not under the control of the project, if it was not for their work, the project may of never went ahead and then there may of never been an atomic bomb, or another country would have built it, or without their work the project may of taken at lot longer than it did. Oppenheimer also worked at the University of Chicago, he was asked in 1942 to take over research on fast neutron calculations, key to calculations about critical mass and weapon detonation at University of California, Berkeley. To show that the man who to was to be appointed scientific director of the entire project show this place had a significant contribution as the work there went on to help them build the bomb. The university was also a part of looking at if the bomb would work, Edward Teller made some of the initial calculation, and his figures indicated that the bomb would, indeed, create enough heat to ignite the earth's atmosphere. ...read more.

He had a lot of power in the project and had the freedom to whatever as long as the job got done. You also have the work of the people at University of Chicago and Oak Ridge, Tennessee, Hanford Site and Los Alamos, New Mexico, as the work they did lead to the building and testing. The president that was in office of the time of building the project had a role to play, FDR in starting it all off and giving the go ahead, and Truman giving the go ahead to use the bombs. Oppenheimer was noted for saying when he sees the bomb being tested, he thought of a verse from the Hindu holy book, the Bhagavad Gita: If the radiance of a thousand suns were to burst at once into the sky, that would be like the splendor of the mighty one... Years later he would explain that another verse had also entered his head at that time: "We knew the world would not be the same. A few people laughed, a few people cried, most people were silent. I remembered the line from the Hindu scripture, the Bhagavad-Gita. Vishnu is trying to persuade the Prince that he should do his duty and to impress him takes on his multi-armed form and says, 'Now, I am become Death, the destroyer of worlds.' I suppose we all thought that one way or another." Show what must people though and still thing of the bomb, the destroyer of worlds, so yes Oppenheimer did have a significant contribution to the Manhattan project, but yet if it was not for the work of the thousands who work on it the atomic bomb may never of been built, so yes he did if you look at what he did, which was a great deal for the project, but you can't count out the other people that worked on the atomic bomb programme. ?? ?? ?? ?? Paul Robinson word count 3070 ...read more.