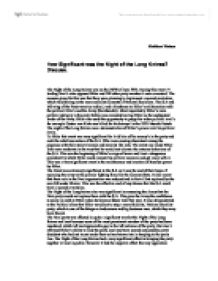 How Significant was the Night of the Long Knives?

Matthew Watson How Significant was the Night of the Long Knives? Discuss. The Night of the Long Knives was on the 29/30 of June 1934. During this event 77 leading Nazi's who opposed Hitler and 100 other party member's were executed. The reasons given for this was that they were planning to implement a second revolution, which would bring in the more socialist elements of National Socialism. The S.A and left wing of the Party were too radical, and a hindrance to Hitler's collaboration with the political Elite's and the Army (Reichswehr). Most importantly Hitler's main political advisory in the party Rohm was executed leaving Hitler as the undisputed leader of the Party. Hitler also used this opportunity to purge his wider political rival's for example Gustav von Kahr was killed for his betrayal in the 1923 Munich Putsch The night of the Long Knives was a demonstration of Hitler's power over his political rivals. ...read more.

The Night of the Long knives also was significant in reassuring the Army that the Nazi party would not replace them with the S.A. This gave the Army the confidence to swear an oath to Hitler when he became fuhrer later that year. It also demonstrated to the Political elites that Hitler would act to stop a more Socialist, National Socialist party, which is one of the things as landowners and big business men, which they may have feared. The Nazi party was effected in quite a significant way by the Night of the Long Knives not least because some of the most prominent member of the party had been murdered, which left and appreciable gap in the left extreme of the party. But also it affirmed Hitler's ability to lead the party, and may have scared any possible party dissident who had not as yet made them selves known into in keeping to the party line. ...read more.

The European nations probably reported the event and may have felt that it was an internal German matter. Even if there had been out rage about the Night of the Long Knives there if little that could have been done as the LON was beginning to fall apart and the depression was still biting. The Night of the Long knives obviously had different amounts of significance to different people, however it can be considered a very significant turning point in Nazi Germany. It was the point at which any possibility of a Socialist, Nazi party was Vanquished and also a point where the S.A became less powerful and less important. It also rid Hitler of his political enemies, which is more significant since Hindenburg died two month's later. This removal of opponent's ensured Hitler was in the position to become fuhrer. This was more luck than Judgement but above all Hitler was a very fortuitous man. The Night of the long Knives was one of the most significant events in Hitler's acclamation of total dictatorial power in Germany. ...read more.