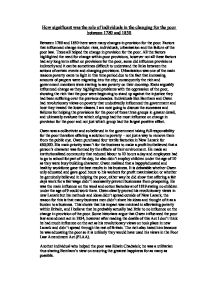 How significant was the role of individuals in the changing for the poor between 1780 and 1850 Between 1780 and 1850 there were many changes in provision for the poor. Factors that influenced change include: riots, individuals, urbanisation and the failure of the poor law. These all helped the change in provision for the poor. All the factors highlighted the need for change within poor provisions, however not all these factors had any long term effect on provisions for the poor, some did influence provisions indirectly and it can be sometimes difficult to understand the links between the actions of certain events and changing provisions. Urbanisation was one of the main reasons poverty came to light in this time period due to the fact that increasing amounts of paupers were migrating into the city; consequently the rich and government members were starting to see poverty on their doorstep. Riots arguably influenced change as they highlighted problems with the oppression of the poor, showing the rich that the poor were beginning to stand up against the injustice they had been suffering over the previous decades. Individuals like Bentham and Owen had revolutionary views on poverty that undoubtedly influenced the government and how they treated the lower classes. I am now going to discuss the successes and failures for helping the provisions for the poor of these three groups in greater detail, and ultimately evaluate the which of group had the most influence on change in provision for the poor and not just which group had the largest positive effect. ...read more.

The leaders of Chartists differed largely with two different attitudes on how the movement should take place, these were the: moral force chartists and the Physical force chartists. The moral group believed in peaceful demonstration and petitions in trying to bring about change. At the start of 1848 Karl Marx published his communist manifesto in London, which led to a march to the House of Lords where the leader at this time was O'Connor, to present signatures of those supporting the chartist movement. However there were nowhere near as many signatures as he promised and the movement slowly collapsed. But the effect was significant as 5 of the 6 demands were met, this included secret ballots and gave every man of 21 the right to vote. The aim that elections for a new parliament were to take place every year did not pass. This may be seen as a success but the shift of power still never happened. This shows that the riots only gave the illusion of change within Britain but still never really changed poor relief. Failure of the poor law did help bring change in provision for the poor. There were many different aspects of the old poor laws, I am going to focus on the act of settlement, Gilberts Act and Speenhamland system (this wasn't a law just a system in East Anglia). The Laws of settlement prevented the poor from moving to different areas, your place of settlement was where you were born or where you have lived for more than 3 years. ...read more.

This shows that without urbanisation many riots would never have taken place to provoke change. A link between urbanisation and the failure of poor laws can be made as due to urbanisation because the government couldn't afford to pay poor relief and subsides wages as the population had increased. This in turn led to weaknesses being highlighted in the system; this including corruption and bribery due to the overseers working because of the knowledge of future political success, and so the poor law amendment act stated that commissioners could not become a member of parliament, this helped avoid corruption in the future. I believe the poor law amendment act however was too brief and didn't really help the poor enough but only gave the illusion of help, the government wanted to spend as little money as possible but also didn't want the poor to think the government weren't trying to help them. JD Marshall who wrote a book in 1975 about the poor laws also shares this view. So overall I think that urbanisation directly and indirectly help provision for the poor the most and not individuals as it was urbanisation and industrialisation that highlighted the need for change in the poor law system. I also believe that the government did not do enough to help the poor but only painted over the cracks in poverty and the corruption of the enforcers. This illusion of help and care as improved but I still share the view that it will never go and human greed will always be the first priority and not the need of the people. ?? ?? ?? ?? ...read more.