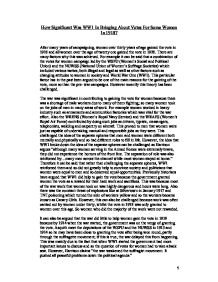 How Significant Was WW1 In Bringing About Votes For Some Women In 1918?

How Significant Was WW1 In Bringing About Votes For Some Women In 1918? After many years of campaigning, women over thirty years of age gained the vote in 1918 and all women over the age of twenty one gained the vote in 1928. There are many factors why this was achieved. For example it can be said that a combination of the votes for women campaign led by the WSPU (Women's Social and Political Union) and the NUWSS (National Union of Women's Suffrage Societies) which included various tactics, both illegal and legal as well as other factors such as changing attitudes to women in society and World War One (WW1). This particular factor has in the past been argued to be one of the main reasons for the gaining of the vote, more so than the pre- war campaigns. However recently this theory has been challenged. The war was significant in contributing to gaining the vote for women because there was a shortage of male workers due to many of them fighting; so many women took on the jobs of men in many areas of work. For example women worked in heavy industry such as armaments and ammunition factories which was vital for the war effort. Also the WRENS (Women's Royal Navy Service) and the WRAFS (Women's Royal Air Force) contributed by doing such jobs as drivers, typists, messengers, telephonists, welding and carpentry on aircraft. This proved to men that women were just as capable of undertaking manual and responsible jobs as they were. ...read more.

Examples of the more peaceful tactics included holding various meetings. These were both semi private and public, for instance Lydia Becker and other suffragette members spoke at various church groups and speakers were invited to meetings at people's houses. Other larger, more public meetings also took place; for example in 1909 large meetings were held at the Royal Albert Hall in London, the Synod Hall in Edinburgh as well as in other large meeting halls such as the Albert Hall in Nottingham. These meetings generated publicity and were also an effective way of recruiting new members to the suffragette movement. Other legal methods of the campaign included demonstrations and pilgrimages; these were often highly impressive and colourful. Demonstrators dressed in the colours of the suffragette movement which were purple, green and white. An example of such a demonstration happened in 1908 when Emmeline Pankhurst, the founder of the WSPU led a large scale demonstration where seven different processions met in Hyde Park. Propaganda also played an important part in the suffragette campaign. Techniques included the publication of 'The Suffragette' newspaper which was published from 1913. Poems, short stories and plays such as 'How the Vote Was Won' written by Elizabeth Robins, an active member of the WSPU and a well known dramatist were performed to audiences around the country. The WSPU also designed, advertised and sold various merchandises in their London shops such as soap, cakes, jewellery, cards, stationary, badges, bags and blouses. It was a combination of all of these techniques that increased the membership of the movement, for instance membership of the NUWSS grew from 6,000 in 1907 to 50,000 by 1914. ...read more.

It is also debatable that WW1 was the most significant factor of all. It can be seen that without the pre- war suffrage campaign the issue of female suffrage would not have been raised and so without it WW1 would most likely have had no effect on female suffrage as it did in France. Also the pre- war campaign gained many important and influential supporters who were able to influence change within the government and so succeeded in coming closer to the government granting women the vote. WW1 can also be seen as less significant than previously thought because in some ways it is possible that it delayed the vote being granted for a further four years. It is also possible to discredit the argument that the vote was grated as a reward for women who had taken part in war work because the women who did the majority of the work were not rewarded by the vote until 1928 when the voting age was reduced to the age of twenty one, the same as men. However without the political changes in government which happened as a result of WW1 and also the issue of male suffrage being raised in 1916 it is doubtful that the vote would have been given in 1918.Therefore it can be seen that although WW1 was certainly an important factor in bringing about votes for women, it is by no means that most important or significant. It is effectively a combination of all three factors that resulted in female suffrage being granted in 1918, twenty years after the issue of female suffrage was first raised by the NUWSS in 1897. ...read more.