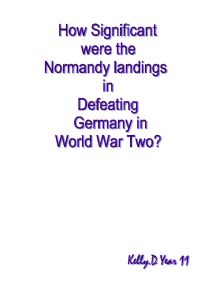 How Significant were the Normandy landings in Defeating Germany in World War Two?

1. Using source A and your own knowledge explain why the D-day was such an important event of World War two? D-Day was such an important event of World War Two for numerous amounts of reasons. The term 'D-Day' actually means 'The Day'. As said by Major Elson, it is the day where "everyone does something". Major Elson fought on the Italian front, which is demonstrated on the map. D-Day was to be June 1944 minutes between night turning to morning on the 6th. The Germans had occupied France and France needed Britain, Canada and America to come together to regain the French territory for them. As well as this, Russia was fighting of Germany in the East and needed the Allies to relieve pressure. D-Day was a very important part into ending the war but other factors include the Battle of the Atlantic, the fighting in North Africa and the Battle of Britain. Arriving at Normandy using the Mulberry harbours, the Allies captured all of the five designated beaches (Omaha, Juno, Gold, Sword and Utah) despite strong German coastal defences. This is mainly due to the opposing armies having no idea to where the Allied forces would be landing because no place in France were called those names. The map shows where the troops entered France and this also clearly enforces the sheer scale of the invasion and its importance into keeping it top secret. Meanwhile, parachutists were flown in nearly 20 minutes after mid-night to capture Pegasus Bridge on the River Orne and Vier. This was important as it prevented German counter attacks from transporting troops to the beaches. As quick as they could, the Americans advanced all the way up to Cherbourg and captured it. Meanwhile, the British struggled pushing through Norman hedgerows which proved excellent cover for the defending German formations but the Allies succeeded in liberating the city of Caen in the end. ...read more.

I know, however, that there was from my own knowledge but this source doesn't imply anything of the kind-5 days into the D-Day landings and Stalin is congratulating him already, before they have really begun. So in that sense, Stalin's view isn't that reliable in the importance of D-day. On the other hand, Stalin wrote it so it has to be reliable-it is first hand evidence. He was there to witness the goings on at the time - you can't get much closer to it than that and he shows his support to Churchill. Although Russia signed the Nazi-Soviet Pact with Germany, it was under a mutual understanding and this didn't make them Allies, it merely kept the peace for a little while. So there would be no reason for this source not to be unreliable as they were Allies. Stalin also proves from the Pact that he wasn't at all with Germany because he says the 'hysterical Hitler boasted for two years that he would invade England across the channel but could not even make up his mind even to attempt carrying out the threat'. This means one of a few things. Firstly, Stalin stitched up Hitler to Churchill about Hitler's 'threat' to invade England. Secondly, he criticises him, calling him 'hysterical'. This clearly states he was never a German ally, he just used the Nazi-Soviet Pact as much as Hitler did. Stalin was Allies with Churchill and Churchill was the prominent figure who arranged D-Day. Therefore, his evidence has to be somewhat reliable and relevant to the importance of D-Day. 5. Study sources G and H. Which of these sources is more useful as evidence in assessing the significance of D-Day? On the one hand, Source H is obviously written by one of the allies rather than Germany, as it does not say as such. I know this because the way in which Geoffrey Elliot refers to the event is on a positive note. ...read more.

Furthermore, Britain sent a van around Scotland sending out more false alerts of an invasion from Scotland and they bombed Calias 3-4 times more than Normandy so the Germans would think an attack would be in Calias. They also invented special tanks to overcome German obstacles, they used reflective stripes to confuse German radar systems and they code-named the beaches so the Germans didn't know where they were going to attack. This is a drastic amount of preparations to undergo but these kinds of preparations meant that Germany didn't, in theory, stand a chance of winning. I don't think Churchill would have organised such a large-scale invasion, involving 4 main countries if he wasn't assured of a beneficial outcome. I think most of the significance of D-Day and the invasion of Normandy was, on the whole, down to exceedingly good planning and a lot of luck. However, the sources, overall, in this paper and from my own knowledge, have convinced me that D-Day and the invasion of Normandy are the most significant factors to the defeat of Germany in the Second World War. The Invasion of Normandy led to a lot of things. For instance the capture of Cherbourg, Caen and Paris. The Falaise Gap was a great achievement as it captured 50,000 German troops and from then the Allies progressed fast to the French-German border where the Battle of the Bulge took place. The Allies won this two and then it was just a race with Russia to get to Berlin. Of course there were set backs, like the weather, the struggle at Caen and the capture of Omaha beach, but that's expected in a large-scale invasion as this. But on the whole, there were a lot of achievements and the invasion accomplished their targets and the invasion was a success. Germany surrendered on the 5th May 1945 and there was victory in Europe at last. Without all the other factors that led up to D-Day and the luck involved, Normandy wouldn't have either taken place, succeeded or succeeded as well as it did. Kelly Duggan Normandy coursework LWS Yr11 Oct 2003 ...read more.