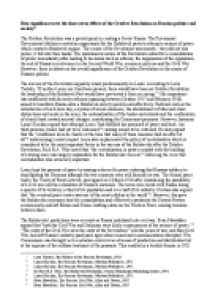 How significant were the short-term effects of the October Revolution on Russian politics and society?

﻿How significant were the short-term effects of the October Revolution on Russian politics and society? The October Revolution was a pivotal point in creating a Soviet Russia. The Provisional Government's failures created an opportunity for the Bolshevik party to attempt a seizure of power which created a Bolshevik regime. The course of the Revolution was smooth - they did not size power; it fell into their hands. The spontaneous nature of the Revolution called for a consolidation of power immediately after leading to decisions such as reforms, the suppression of the opposition, the end of Russia's involvement in the Second World War, economic policies and the Civil War. However, there is debate on the overall significance of the October Revolution in the course of Russian politics. The success of the Revolution arguably relied predominantly on Lenin. According to Leon Trotsky, ?If neither Lenin nor I had been present, there would have been no October Revolution: the leadership of the Bolshevik Part would have prevented it from occurring.?[1] His importance was reaffirmed with his early reforms (spanning between October 1917 and February 1918) aimed to transform Russia intro a Bolshevik society quickly and effectively. Reforms such as the introduction of an 8-hour day, a system of social insurance, the abolishment of titles and class distinctions and ranks in the army, the nationalisation of the banks and schools and the confiscation of church land created societal changes, contributing the Communist promises. ...read more.

This resulted in a terrible famine in 1921 which killed between an estimated 7,500,000 to 10,000,000 Russians. It also saw the introduction of the ?Red Terror? which seek to eliminate all counter-revolutionaries and the cruel treatment of the bourgeoisie. This also led to the execution of the Romanov family to finally sever all Russia's ties with Tsarism. As the Bolsheviks began to assert control, they implemented a new strategy of detaining the opposition in concentration camps and programmes of forced labour followed afterwards. J.N. Westwood argued that ?probably in 1923 the unpopularity of the government was great as two years earlier; the workers were still underpaid, underfed and unproductive, while the peasants had never forgotten their treatment under War Communism.. In both town and country there was a feeling that every Communist was a little tsar.?[8] This summaries the significance of the Civil War as relatively useless in addressing the people's demands and again, just consolidating the Bolsheviks' absolute power over Russia. However, Mawdsley seemingly disagrees, giving the treatment of the Russian people creditability as it worked: ?..the Bolsheviks readiness to use extreme methods against their enemies was an important element in their keeping control of central Russia ? at a time when their political base was small and they had little to give the people.? Wise also agreed that despite the use of terror and the terrible conditions of Russia after the ...read more.