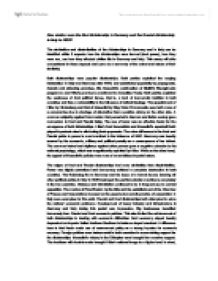 How similar were the Nazi dictatorship in Germany and the Fascist dictatorship in Italy to 1939? The similarities and dissimilarities of the dictatorships in Germany and in Italy can be identified within 3 aspects: how the dictatorships were formed (took power), how they were run, can how they affected civilian life in Germany and Italy. This essay will offer comparisons in these aspects and come to a summary of the extent and nature of their similarity. Both dictatorships were popular dictatorships. Both parties exploited the surging Nationalism in Italy and Germany after WWI, and established popularity by propaganda, rhetoric and attracting promises, like Mussolini's continuation of Giolitti's Risorgimento programme and Hitler's promise to overthrow the Versailles Treaty. Both parties exploited the weakness of rival political forces, that is, a lack of democratic tradition in both countries and thus a vulnerability to the influence of radical ideology. The appointment of Hitler by Hindenburg and that of Mussolini by King Victor Emmanuelle were both more of a compromise due to shortage of alternative than a positive victory on the other side. ...read more.

The Reichstag fire in Germany and the issue of a formal decree banning all other political parties in Italy in 1926 destroyed the parliamentarian machinery completely in the two countries. Violence and intimidation continued to be in frequent use to combat opposition. The murder of Ernst Roehm by the SSs and the establishment of the Chamber of Fasces and Corporations imposed on the pseudo-democratic practice of corporatism in Italy were examples for this point. Fascist and Nazi dictatorships both attempted to solve the nations' economic problems. Development of heavy industry and infrastructure in Germany and Italy during this period was impressive. Big businesses benefited immensely from Fascist and Nazi economic policies. This also limited the achievement of both dictatorships in dealing with economic difficulties: Nazi economy stayed heavily dependent on imports. Italian Northern-Southern imbalance stayed unsolved. A difference here is that Nazis made use of rearmament policy as a strong impetus for economic recovery. ...read more.

The presence of Church as a counterforce of the Fascist dictatorship was also a major difference between the two dictatorships. This limited Fascist control over civilian cultural, religious and intellectual life. Unlike Mussolini whose whole image was no much more than rhetoric and glamour, Hitler viewed himself as a profound intellectual thinker and substantially influenced social ideology through his thoughts like expressed in his lectures and Mein Kampff. The overall force that united Italian people was not the negative resistance and a lust for revenge like that Nazi society embodied, but a positive ambition of less depth and weight. Nazism is but a variant of fascism in a heterogeneous circumstance. The political and ideological natures of them are essentially of the same origin: the fin-de-si�cle philosophies of Social Darwinism, Nietzschean humanism, and revolt against liberal democracy as a continuum of Marxist thoughts. Nazi dictatorship extended the social implantation of fascism because of Germany's different post-war circumstance and social constitution. The difference in the leaders' personalities was in minor importance but it differed the practice of certain policies, for example Hitler's invigoration of Anti-Semitism. ?? ?? ?? ?? ...read more.