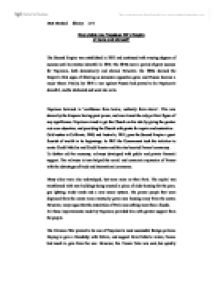 How stable was Napoleon III's Empire at home and abroad?

How stable was Napoleon III's Empire at home and abroad? The Second Empire was established in 1852 and continued with varying degrees of success until its eventual downfall in 1870. The 1850s were a period of great success for Napoleon, both domestically and abroad. However, the 1860s showed the Empire's first signs of faltering as domestic opposition grew and Prussia became a major threat. Finally, by 1870 a war against Prussia had proved to be Napoleon's downfall, and he abdicated and went into exile. Napoleon believed in 'confidence from below, authority from above'. This was shown by the Emperor having great power, and was almost the only political figure of any significance. Napoleon aimed to get the Church on his side by giving the greater rule over education, and providing the Church with grants for repairs and restoration. Gold rushes in California, 1849, and Australia, 1851, gave the Second Empire a great flourish of wealth in its beginnings. ...read more.

By 1856 Napoleon had achieved a very welcome victory, now showing that France was a major European power once again. During the 1860s the economy was unsteady in France. The banking system appeared to have failed as investments went out of control and an economic crash became inevitable. There was now also some political opposition to Napoleon. The 'Third Way' party was formed in 1863 from members of the majority government. They wanted further reforms and had support from Orleanists and Republicans. However, by 1869 Napoleon adopted the reforming policy of the 'Third Way' party as his own and by 1970 the majority of people willingly embraced these changes and Napoleon's popularity remained. During the 1860s however Napoleon's foreign policy was dire. The Mexico affair overshadowed all over foreign event during the early 1860s. Mexico was in a state of civil war and the interest payments to international countries had been suspended. France and Britain made a joint venture to restore European interests in Mexico. ...read more.

A cunning edited text of the King's telegram by Bismarck about the incident created uproar in both countries. This was known as the 'Ems Telegram'. On the 19th July France declared war, another bad decision made by Napoleon. The French army was in a poor state and there was no 'real' need for France to go to war. The Prussian army however was well trained and had just seen action in the Austro-Prussian war. The Prussian army was too powerful for France and by 3rd September Napoleon had surrendered. This marked the end of the Second Empire. Despite great advances both at home and abroad in the 1850s, Napoleon's foreign policies and decisions in the 1860s and 1870 caused an end to the Second Empire. Unlike his uncle, Napoleon IIIs talents lay in domestic reform, even though by 1869 the economy and banking system were crashing, he still retained the support of the people. The Mexico affair and the Franco-Prussian war showed the opposite of the great victory over Russia in the Crimean war. Matt Marshall Shirley LVI ...read more.