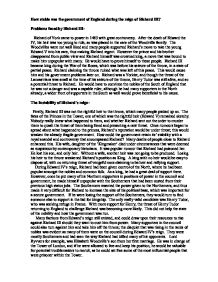 How stable was the government of England during the reign of Richard III?

How stable was the government of England during the reign of Richard III? Problems faced by Richard III- Richard of York came to power in 1483 with great controversy. After the death of Edward the IV, his heir was too young to rule, so was placed in the care of the Woodville family. The Woodvilles were not well liked and many people supported Richard's move to take the young Edward V into his care, thus making Richard regent. However the prince and his brother disappeared from public view and Richard himself was crowned king, a move that was bound to make him unpopular with many. He would have to prove himself to these people. Richard III became king during the War of the Roses, which was before his seizure of the throne, in a state of partial peace. Richard claiming the throne ruined what was left of this peace. This would cause him and his government problems later on. Richard was a Yorkist, and though the threat of the Lancastrians was small at the time of his seizure of the throne, Henry Tudor was still alive, and so a potential threat to Richard. ...read more.

Scotland was close to England, and to lose such a potential ally would be fatal, as any rebel could hope to call on James III for support should they wish to usurp the throne. Indeed, James III decided to help the campaign of Henry Tudor, which would not be considered any good for the fail stability of the government. A factor that was completely out of Richard's control was the bad harvest that struck England. Bad harvests affected everybody and he was considered responsible for this. A bad harvest meant prices rose, the economy would slump, and with Richard's train of poor luck (the death of his heir, wife, and various scandals of incest and murder) he was considered a bad omen, and the cause of such a poor crop. Having a reputation as a "wicked" man did not help him in the slightest. Many people would not ever get to see the king, so the portraits that were painted of him would be important in the way he was perceived. Perhaps the most famous portrait of him is an anonymous portrait in the National Gallery, painted circa 1500. (After his death) It shows Richard as a very sallow regal figure, with a hunchback. ...read more.

Yet had Richard survived and perhaps remained in power for a longer period of time the fates of the two Princes which gave him the name of a evil murderer would have slowly been forgotten, and would not have mattered as much as it was blown up to be after his death. Richard had remained loyal through the entire reign of Edward IV and had not seemed to want the throne. The turmoil that he caused by taking the throne did upset the frail peace that had begun to settle, but with time, would have settled down once more had Richard had the time to work on the problem. He had proved himself to be an effective leader, which the government would have found necessary, and had the intention to stabilise the situation, as soon as he had eradicated any threats to his reign, which he considered first priority. The major cracks that endangered the stability of his government were the issuing of jobs to his Northern supporters that would have meant Southerner's discontent, and the undeniable fact that he was not the rightful heir to the throne, and the rightful heir could not be located, due to Richard. These were cracks that would have healed in time, but would have taken a good deal of time to heal, time that Richard did not have. ...read more.