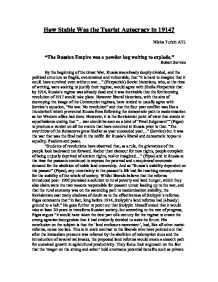 How Stable Was the Tsarist Autocracy in 1914?

How Stable Was the Tsarist Autocracy in 1914? Nikita Turkin ATL "The Russian Empire was a powder keg waiting to explode." Robert Service By the beginning of the Great War, Russia was already deeply divided, and the political structure so fragile, overstrained and vulnerable, that "it is hard to imagine that it could have survived even without war..." (Fitzpatrick) Soviet historians, who, at the time of writing, were seeking to justify their regime, would agree with Sheila Fitzpatrick that by 1914, Russia's regime was already dead and it was inevitable that the forthcoming revolution of 1917 would take place. However liberal historians, with the aim of destroying the image of the Communist regimes, have tended to usually agree with Service's equation, "No war. No revolution" and that the four year conflict was like a thunderbolt which prevented Russia from following the democratic path to modernisation as her Western allies had done. However, it is the Revisionist point of view that stands in equal balance stating that "...war should be seen as a kind of 'Final Judgement'" (Figes) to produce a verdict on all the events that have occurred in Russia prior to that. "The overthrow of the Romanovs grew likelier as year succeeded year..." (Service) but it was the war that was the final nail in the coffin for Russia's liberal and democratic hopes to equality, freedom and peace. "Students of revolutions have observed that, as a rule, the grievances of the people look backward not forward. Rather than clamour for new rights, people complain of being unjustly deprived of ancient rights, real or imagined..." (Pipes) and in Russia at the time the peasants continued to express the paternal and unequivocal economic demand for the abolition of noble land ownership. And as "Russia's stability depended on the peasant" (Pipes), any uncertainty in the peasant's life had far reaching consequences for the stability of the whole of society. ...read more.

The peasant became more politically conscious without the aid of the Socialists, in what ever form they came. The peasants were independent, and this would prove correct in February 1917, when they finally did seize land without much help of socialist parties. Although we know, by looking at the last two Duma compositions, that the peasants were more favourable towards the socialists. When this combined with the peasant's declining respect for established authority especially the nobles, the trend of demands accelerated. If "noble landownership, the prime source of peasant resentment, was far from fading peacefully away" (Acton), then the hope for stability had disappeared as the peasants clamoured for improvements both economically and politically. Stolypin's policy did little or nothing to restrict or halt the ferocity of the peasants' attack upon the nobility. 1905 was a prime example. Despite increases in standard of living and wages, the revolutions went ahead. This shows the peasants were in fact more aware politically and the fact that it was impossible to have economic modernisation without political liberation, such as the right to own all land. While Revisionists rightly agree that peasants could have been better off and perhaps this would have prevented revolution, they stop short of the extremities the Soviets choose to say. Revisionists contradict the central features of the Soviet camp, by stating that the situation wasn't as bad as the Soviets say it was, and that there was hope and revolution was certainly not inevitable. There was at least hope for stability. While on the other hand both currents of Revisionists likewise show opposition to liberal optimism by playing down the significance of reforms that liberals place, and question whether those reforms would actually lead to social stability. According to Service, the conventional wisdom and feeling has been that some kind of revolution was on the way and highly likely, just no one knew when. ...read more.

His landed nobility support was too narrow a political base to keep him in power, the police force too small, corrupt and ill- trained to keep control of the towns and the Army refused to co- operate with the Tsar's wishes when it itself wanted reform. The Autocratic regime was becoming more and more unstable, and "the writing was on the wall before the war broke out" (Acton). Tsarism was "a deadlocked political system, drifting helplessly towards destruction" (A. K. Wildman). War only speeded up the regime's demise, as Gorky said, one thing was clear and that was that with the entrance to the 1st World War, Russia was entering the 1st act of a worldwide tragedy. There are many points on which the Revisionists and Soviets agree, namely that by 1914 the regime was already on the road to revolution, but where as the Soviets explanations for that route take is due to the fantastical determinist highly inevitable socialist theory and the great genius of its leaders, the Revisionists point more towards personal experience being the key to the radicalisation of peasants and workers. The liberal view of gradual recovery by Russia if not for the "bolt form the blue" World War One seems just as unlikely as the Soviet claims. The Revisionists seems to offer a realistic explanation of the fall of one the greatest Empire's of history, through a mixture of balanced arguments, analysis and a substantial examination of facts. We know that Russia was on the path to annihilation, but the Revisionists in detail provide a sensible answer, accommodating for the war being the last kick in the backside and how it proved to be the Empire's undoing. "The old regime had been lucky in 1904- 06... It was no so lucky in 1914- 1917" (Sheila Fitzpatrick) 1 Figures published by the Ministry of Trade and Industry for strikes in workplaces covered by factory inspection. ?? ?? ?? ?? ...read more.