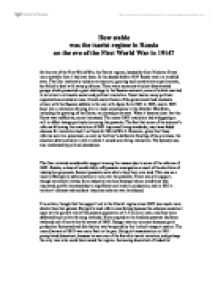 How stable was the tsarist regime in Russia on the eve of the First World War in 1914?

How stable was the tsarist regime in Russia on the eve of the First World War in 1914? On the eve of the First World War, the Tsarist regime, headed by Czar Nicholas II was more unstable than it had ever been. In the decade before 1914 Russia was in a troubled state. The Czar insistently ruled as an autocrat, ignoring such constraints as parliaments, but failed to deal with many problems. There were numerous virulent discontented groups which presented a great challenge to the Russian autocrat, some of which resorted to terrorism to stimulate social and political revolution. Never had so many political organizations existed at once. Unrest and criticism of the government had reached a climax with the Russian defeats in the war with Japan from 1904 to 1905, and in 1905 burst into a revolution forcing him to make concessions in the October Manifesto, including the granting of the Duma, an elected parliament. When it became clear that the Duma was ineffective, unrest increased. ...read more.

Stolypin's assassination in 1911 precipitated discontent, because he was one of the few able tsarist ministers, and perhaps the only man who could have saved the regime. Increasing discontent of industrial workers was vented through a wave of strikes in April 1912, set off by the shooting of 270 strikers in the Lena goldfields. There was a growing agitation among the workers which in St Petersburg in 1914 assumed proportions of incident revolution with street demonstrations, shootings and the building of barricades. The improvements were obviously not enough to palliate grievances. There was little relaxation of the Government's repressive policy as the secret police rooted out revolutionaries among university students and professors and deporting masses of Jews, Poles and other minorities, as well as liberals which dominated the Russian parliament. This ensured that these subversive groups were firmly anti-tsarist. These groups spread propaganda to tarnish the Czar's image. The minorities despised autocratic rule, but they chiefly craved autonomy and not the overthrow of Czardom. ...read more.

Through hypnosis, Rasputin was able to heal his haemophilia. Eventually Rasputin became a powerful figure behind the throne, but attracted public criticism by his drunkenness and affairs with court ladies. Because Alexandra ignored the scandals and the Duma's request the Rasputin be sent from the court, the monarchy grew more unpopular. On the eve of the first World War, the Romanov Dynasty was no longer supported by the Russian masses. The Czar had estranged himself from the people and progressively undermined the legitimacy of his own rule. However, the Czar still controlled the army and police and may have been able to hold on if a major revolution erupted. The army enabled him to secure authority and suppress the strikes. It was really the First World War, which exposed corruption and incompetence, and which caused recalcitrant troops which refused to protect their leader. This was what really shook the already delicate dynasty. As for the masses, their discontent festered over the years, and with the economic inflation and military defeat triggered by World War I, it was ready to explode. ...read more.