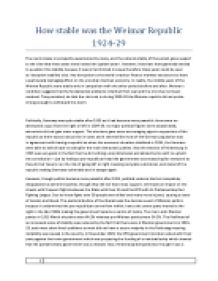 ﻿How stable was the Weimar Republic 1924-29 ________________ The real increase in prosperity experienced by many, and the cultural vitality of the period, gave support to the view that these years were indeed the ?golden years?. However, historians have generally tended to question this stability because it was in fact limited in scope therefore these years could be seen as ?deceptive stability? also. Any disruption to the world?s trade or finance markets was bound to have a particularly damaging effect on the uncertain German economy. In reality, the middle years of the Weimar Republic were stable only in comparison with the other periods before and after. Weimar?s condition suggests that the fundamental problems inherited from war and the crisis has not been resolved. They persisted, do that the crisis set in during 1929-30 the Weimar republic did not probe strong enough to withstand the storm. Politically, Germany was quite stable after 1923 as it had become more peaceful: there were no attempted coups from the right or left in 1924-29, no major political figures were assassinated; extremists did not gain mass support. The elections gave some encouraging signs to supporters of the republic as there was an actual rise in votes and it seemed like most of the German population was in agreement with having a republic as when the economic situation stabilized in 1924, the Germans were able to switch back to voting for the main democratic parties. ...read more.

Versailles were brought out (hence the ?passive resistance? and refusal of paying the reparations in the Ruhr when the French and Belgians invaded) and with national disturbance means a government disturbance. The economy was still reliant and heavily dependent on the short-term American loans which was very dangerous in the sense that if America ever got into trouble (which it did in 1929), when America falls, so would Germany. Even though the production levels were increasing, Germany was still lagging behind all the other countries which made the nation feel that they were not progressing blaming it on the republic. Unemployment remained around 1 million because of the sacking of workers to try and get the economy in control as with les workers it meant less money to give them for their work. This of course had a drastic effect on the unemployed as without a job there was no way of supporting their family as there was no financial security. These unemployed, struggling people would then vote for a party who said they would get everybody a job hence voting for the NSDAP (the right wing) which went against the republic causing instability within the government as more anti-Weimar parties were slowly being voted in which caused unrest in the government resulting in instability. ...read more.

Weimar society was becoming increasingly polarized before the onset of the political and economic crisis in 1929 and reinforced their hostility to the regime which proved Germany was instable and could not manage this change in Germany. It is apparent that whilst in comparison to the turbulent years of 1919-23 the mid to late 1920s did not provide the depth of stability the Republic needed to survive the severe economic and political conditions of the early 1930s. Economic recovery simply was not good enough and lacked the structural integrity to withstand recession whilst Germany itself through its extensive loans with America was too exposed to the collapse of the American economy. Politically, the Weimar republic had been hampered by a variety of relatively weak coalition governments. Whilst there might have been support for the Republic there was no real love for it among the German people and this was shown in the election of the traditional president, General Hindenburg, in 1925 and again in 1932. When the republic faced a real crisis the support for it too easily dissipated and suggests that the stability the republic enjoyed in the mid-late 1920s was superficial despite the work of Stresemann in restoring Germany to the diplomatic fold. ...read more.