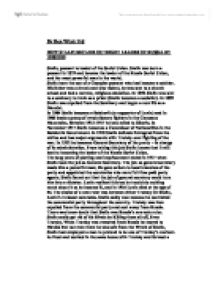 By Ben Wink 11d HOW STALIN BECAME OUTRIGHT LEADER OF RUSSIA BY 1928/1929 Stalin, peasant to leader of the Soviet Union. Stalin was born a peasant in 1879 and became the leader of the Russia Soviet Union, and the most powerful man in the world. Stalin born the son of a Georgian peasant who had become a cobbler. His father was a drunk and was violent, he was sent to a church school and had a narrow, religious education. In 1894 Stalin was sent to a seminary to train as a priest (Stalin becomes a socialist). ...read more.

In 1922 he becomes General Secretary of the party - In charge of its administration. From taking this job Stalin knows that it will lead to becoming the leader of the Russia Soviet Union. The long years of plotting and imprisonment ended in 1917 when Stalin took the job as General Secretary. The job as general secretary made him a powerful man; He gave orders to local branches of the party and appointed the secretaries who were full time paid party agents. Stalin found out that the job of general secretary could turn him into a dictator. ...read more.

Stalin easily got rid of his Rivals by Killing them all off, Even Trotsky. When Trotsky was removed from Russia he moved to Mexico But not even there he was safe from the Wrath of Stalin, Stalin had employed a man to pretend to be one of Trotsky's workers he lived and worked in the same house with Trotsky and formed a good friendship but one night in 1940 Stalin's man attacked Trotsky with an Ice pick embedding it in his head. By Ben Wink 11d By 1928/29 Stalin was the outright leader of the country. From a peasants son to the most powerful man in the world. Stalin had started with nothing and had became a great dictator. ...read more.