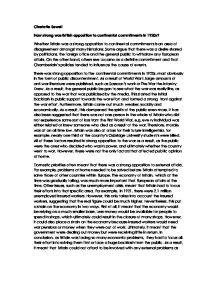 How strong was British opposition to continental commitments in 1920s?

Charlotte Sewell How strong was British opposition to continental commitments in 1920s? Whether Britain was a strong opposition to continental commitments is an area of disagreement amongst many historians. Some argue that there was a desire shared by politicians, the foreign office and the general public to withdraw any European affairs. On the other hand, others see Locarno as a definite commitment and that Chamberlain's policies tended to influence the cause of events. There was strong opposition to the continental commitments in 1920s, most obviously in the form of public discontentment. As a result of World War I, large amounts of anti-war literature were published, such as Sassoon's work or The War the Infantry Knew. As a result, the general public began to see what the war was really like, as opposed to the war that was publicised by the media. This started the initial backlash in public support towards the war effort and formed a strong front against the war effort. ...read more.

Other issues, such as the unemployment crisis, meant that Britain had to focus their efforts into that specific area. For example, in 1921, there were 2.1 million unemployed insured workers. However, this only takes into account the insured workers, suggesting that the real figure could be much higher. Nevertheless, this put a strain on the economy in two ways. First of all, it meant that the economy would be relying on a much smaller base. Less money would be available for people to spend in shops, which ultimately could result in the closure of many shops. However, it could also place a strain on the economy because insured workers would need war pensions or money when they were out of work. Ultimately, it meant that the government were dealing out money but were receiving little in return. In conclusion, as Britain was facing so many economic problems, they had to focus all their effort into solving them first or face a huge backlash from the public. ...read more.

Additionally, by active diplomatic involvement, some concessions were given to Germany after the Dawes Plan, such as the Inter-allied Control Commission Withdrawal in 1927 and the Young Plan in 1929. This therefore suggests that although there was not a strong opposition towards assisting in foreign affairs at all, as shown by the large amount of pacts Britain was involved in. furthermore, it also suggests that even if Britain wanted to withdraw from foreign affairs, they had little chance. Overall, in conclusion, British opposition to continental commitments in 1920s was relatively strong, as Britain did withdraw slightly from foreign affairs. For example, relations with France were never stable enough to build a Channel Tunnel in 1920, and it was presumed that relations would never be strong enough either. As a result, the French maintained the Little Entente to ensure increased protection worldwide. Furthermore, opposition to the European military remained strong throughout the period. Nevertheless, the British did not wash their hands of Europe entirely as there was a definite commitment to a diplomatic role, especially in enhancing peace, and even if they did wish to withdraw, they were already involved in far too much to isolate themselves completely. ...read more.