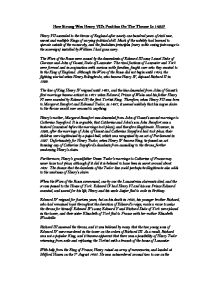 How Strong Was Henry VII's Position On The Throne In 1485?

How Strong Was Henry VII's Position On The Throne In 1485? Henry VII ascended to the throne of England after nearly one hundred years of civil war, unrest and multiple Kings of varying political skill. Much of the nobility had learned to operate outside of the monarchy, and the feudalism principles (every noble owing patronage to the sovereign) installed by William I had gone awry. The Wars of the Roses were caused by the descendents of Edward III sons; Lionel Duke of Clarence and John of Gaunt, Duke of Lancaster. The rival factions of Lancaster and York were formed and in conjunction with various noble families, fought over who they wanted to be the King of England. Although the Wars of the Roses did not begin until 1455, the fighting started when Henry Bolingbroke, who became Henry IV, deposed Richard II in 1399. The line of King Henry IV reigned until 1461, and the line descended from John of Gaunt's first marriage became extinct in 1471 when Edward, Prince of Wales and his father Henry VI were executed by Edward IV; the first Yorkist King. Therefore, when Henry VII was born to Margaret Beaufort and Edmund Tudor, in 1457, it seemed unlikely that his vague claim to the throne would ever amount to anything. Henry's mother, Margaret Beaufort was descended from John of Gaunt's second marriage to Catherine Swynford. ...read more.

There was strong opposition to Henry by people like Margaret of Burgundy, who spoke out against Henry as a usurper with a weak claim to the throne. By the rights of primogeniture, the de la Pole brothers, who were directly descended from the second son of Edward III, had a stronger claim than Henry, who was descended from his third son. None the less, Henry did possess many advantages. He was King through right of conquest, implying that God wanted Henry to become King and so made sure he won the battle. Therefore, if God wanted Henry to be King, then the nobles had no right to try and depose him. The suspected regicide of Richard III was a positive aspect for Henry; the sons of Edward IV were believed to be dead and so could not claim the throne. Richard III's son Edward died in 1484, and with Richard's death in battle, his line had become extinct, which further strengthened Henry's claim. The house of York was marred by Richard's actions and the only other Lancastrian claimant was Jasper Tudor, Henry's uncle who swore his allegiance and remained loyal to Henry until his death in 1495. Henry's marriage to Elizabeth of York was seen by many as a move to unite the warring houses, as their children would be of Edward III's blood on both sides; if Henry could remain on the throne long enough for Elizabeth to produce an heir, then their children would have had an undisputable claim to the throne. ...read more.

Henry was establishing himself as a talented tactician by the way he handled the nobility and quickly cemented his authority throughout the country. When Henry Tudor became Henry VII in 1485, his reign was not expected to last greatly longer than a year. He united the factions of York and Lancaster within three months of his coronation by his marriage to Elizabeth of York. He inspired loyalty in the nobles who had lead the Yorkist cause, he promised peace and stability to the lower classes, and he secured his dynasty with an heir within eleven months of being crowned. There were numerous obstacles working against Henry; there were Yorkists with a claim to the throne at least as strong as his own, he was seen as a Frenchman, he had little support from English noblemen, he had no standing army and the nobility believed they could place whomever they pleased on the throne. But despite numerous reasons that should weaken his position on the throne, Henry VII managed to secure himself quickly and gain control of England and the respect and loyalty of its nobles by sheer political skill, a shrewd mind and decisive merciful action, gaining not only patronage but also respect. There may have been uprisings, pretenders and people determined to undermine Henry's control later in his reign, but he, a relative unknown, ended civil war in England and secured a dynasty lasting almost one hundred and twenty years. ...read more.