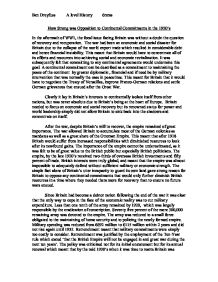 How Strong was Opposition to Continental Commitments in the 1920's

How Strong was Opposition to Continental Commitments in the 1920's In the aftermath of WW1, the focal issue facing Britain was without a doubt the question of recovery and recuperation. The war had been an economic and social disaster for Britain due to the collapse of the world export trade which resulted in considerable debt and hence financial instability. This meant that Britain would have to concentrate all of its efforts and resources into achieving social and economic revitalization. It was subsequently felt that committing to any continental agreements would undermine this goal. A continental commitment can be described as a commitment to maintaining the peace of the continent by greater diplomatic , financial and if need be by military intervention that was normally the case in peacetime. This meant for Britain that it would have to negotiate the Treaty of Versailles, improve Franco-German relations and settle German grievances that ensued after the Great War. Clearly it lay in Britain's interests to continentally isolate itself from other nations, but was never absolute due to Britain's being at the heart of Europe. Britain needed to focus on economic and social recovery but its renowned status for power and world leadership simply did not allow Britain to sink back into the shadows and concentrate on itself. ...read more.

The league is very popular with Britain as Britain no longer has to maintain its illusionary power status and protect other nations. Disarmament and collective security seemed a very productive idea but obviously did not function to the desired effect as no nation willingly wanted to sacrifice its entire armed forces. Britain saw the League of Nations as the perfect way to stay clear from having to make any Military or Financial commitments. Britain felt as though they had been dragged into the war because of alliances and it was not prepared to make any more. It would not ally with France when the French called for a military alliance to deter any future German uprising. Britain rejected this alliance as it felt it went against its National interest to do so. On the other hand however, despite Britain's determination to avoid continental commitments was undermined by joining and becoming a potent member of the League of Nations, as by merely being a member it is continentally committed to all the other members of the League. The League was fundamentally flawed from its birth based on its exclusion of major world nations and lack of actual power in achieving its aims. However the pure fact that Britain was so eager to join the League of Nations is another clear indication of the unwillingness to form any ...read more.

Despite there being total continental commitment as far as the western borders were concerned it was done in the national interest. The British people were delighted with the treaty they had not got involved with anything to do with Eastern Europe, Franco- German cold war had been ended which meant there was less risk of an outbreak in war and therefore less need for a strong military which Britain didn't have. All in all it is fair to conclude that there was significant opposition to continental commitments coming from the public and the Government. These international alliances inflicted memories of the war that was begun as a cause of these commitments. The Government was simply more concerned with recovery and recuperation in the post war years, but however much Britain tried to isolate itself from the rest of Europe and nations, it seemed the more it was being pulled into international affairs that weren't directly related to Britain's problems. Some commitments were made due to sheer necessity and others because they were thought to be generally beneficial to Britain's interests. The certainty is however, that regardless of all opposition, these commitments were unsurpassable and eventually lead to rearmament into the mid thirties, a goal one of the commitments was meant to eradicate. ?? ?? ?? ?? Ben Dreyfuss A level History 6mms ...read more.