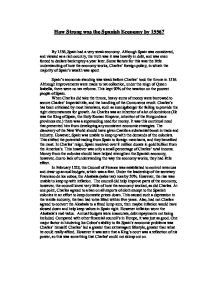 How Strong was the Spanish Economy by 1556?

How Strong was the Spanish Economy by 1556? By 1556, Spain had a very weak economy. Although Spain was considered, and viewed as a rich country, the truth was it was heavily in debt, and was even forced to declare bankruptcy a year later. Some factors for this was the little understanding of how the economy works, Charles' foreign policy, in which the majority of Spain's wealth was spent Spain's economic standing was weak before Charles' took the throne in 1516. Although improvements were made to tax collection, under the reign of Queen Isabella, there were no tax reforms. This kept 90% of the taxation on the poorest people of Spain. When Charles did take the throne, heavy sums of money were borrowed to secure Charles' Imperial title, and the handling of the Comuneros revolt. Charles's has been criticised by most historians, such as koenigsberger for failing to provide the right circumstances for growth. As Charles was an inheritor of a lot of dominions (He was the King of Spain, the Holy Roman Emperor, inheritor of the Burgundians provinces etc.) ...read more.

One major factor in hindering los Cobos's ability to fix Spain's economic problems was Charles' himself. Charles' led a greater than extravagant lifestyle, greater than what he could really afford. However it was seen that a King's court was a reflection of his power, so this was something that Charles' could not skimp out on. Charles' inability to persuade the Cortes to allow tax increases created problems for the economy. Those who could pay taxes, the noblemen and clergy for example were exempt from tax. Charles was unable to tax them, which put a lot of pressure on the countries wealth overall. Attempts were made to tax the noblemen in 1538. This failed as the sisa, tax on food, was rejected. It was estimated this tax would have earned 800,000 ducats a year. As 80% of the income was coming from the poorest people of Spain, the overall standard of living decreased, causing greater economic problems. The population of Castile numbered 5 million, and was increasing rapidly during the 1530s. Spain was significantly rural. ...read more.

As this was a failure, Charles got little return in money and increased Spain's debt. In the Mediterranean, Spanish trade was being disrupted by the increasing Turkish influence there. His campaign in Northern Africa to secure trade and links with the Republic of Genoa was a considerable failure. His major campaign against Algiers in 1541 ended in a catastrophic failure. Charles lost over 150 ships and large sums of money. Charles borrowed heaps more than what his kingdom was earning. During the 1550s, Charles borrowed over 10 million ducats, where Spain's income was no more than 6 million. As Charles fell further into debt, loans were increasingly difficult to find. However banks which were willing to lend Charles sums of money, did it at interest rates ranging from 30% to 60%. In conclusion, Spain's economy wasn't very strong from the beginning of Charles' reign, but because of Charles' policies in Europe, which were necessary for him to remain in power. Spain's wealth was used, as it was the easiest for Charles to take money from. By 1556, Spain had become in a very weak position, as Charles tremendous amounts of borrowing loans, and committing future revenues bankrupted Spain in no more than a year. ...read more.