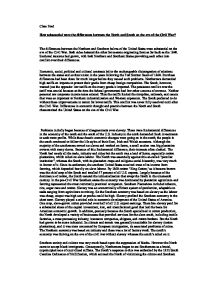 Clare Ford How substantial were the differences between the North and South on the eve of the Civil War? The differences between the Northern and Southern halves of the United States were substantial on the eve of the Civil War. Both sides detested the other for reasons originating from as far back as the 1840. Sectional tensions had grown, with both Northern and Southern States provoking each other into conflict over their differences. Economic, social, political and cultural contrasts led to the unchangeable disintegration of relations between the states and so their union in the years following the Fort Sumter fiasco of 1860. But these differences had been there for much longer before they caused such problems. Northerners demanded high tariffs on imports to protect their goods from cheap foreign competition. The South, however, wanted just the opposite: low tariffs on the many goods it imported. The persistent conflict over the tariff was crucial because at the time the federal government had few other sources of revenue. Neither personal nor corporate income taxes existed. Thus the tariffs funded the turnpikes, railroads, and canals that were so important to Northern industrialization and Western expansion. The South preferred to do without these improvements in return for lower tariffs. ...read more.

The South's response to this was embodied by the 1832 South Carolina Ordinance of Nullification, which accused the North of victimising the culture and Southern states, and of arbitrarily imposing prohibitive taxes on cotton and Southern goods. Later, the South particularly John Calhoun, in his objections to Henry Clay's 1850 Compromise which was to placate sectional antagonises accused their northern neighbours of a long list of offences. The South claimed that it was the victim of restrictive tariffs on Southern products, the implementation of the apparently abolitionist Personal Liberty Laws, and that Northern aggression had been manifested in the Wilmot Proviso which was favoured by free soilers and the Republican Party. The Missouri Compromise which allowed Missouri the 24th state to become a slave state was, in Calhoun's view offensive and repulsive to the decent and civilised inhabitants of the South. The North was enraged by Calhoun's protest in the face of what had appeared to be a successful compromise. They believed that Clay a champion of Southern rights had handled the situation deftly and without overdue bias, although there were obviously clauses that they ardently disagreed with. Sectional tension in America graduated from focusing on slavery and began to concentrate on the notion of Slave Power. ...read more.

By 1860, the differences between the North and South had become so great that Northerners and Southerners felt as if they belonged to two different countries. For two halves of a union to posses such different qualities and ways of life it was almost impossible to avoid civil war. But slavery in the South antagonised the North for example with the Fugitive Slave Act and the North provoked the South with the Abolitionists. With more accommodating compromises and more astute president's war may have been avoided. However the Union could not exist for much longer the way it was with such division. It was unlikely the South would give up its profitable way of life but also as impossible, that the North would lay down its morals i.e. slavery and economic views. Southerners had no desire to abandon a system on which their entire economy depended. Up to 1860, only a few extremists in the South wanted to create a separate Southern country. Moderates of both North and South hoped that a compromise could be reached over their differences about slavery and taxes. But instead the fight over slavery contributed extensively to starting the civil war. The war is sometimes called "the war of Southern Independence" showing the union was divided because the South wanted to break away. Civil War became inescapable and a necessary to resolve the North and South's issues once and for all. ...read more.