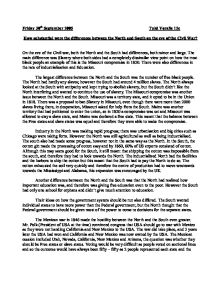 The industrialized North had the facilities and the harbors to ship the cotton but this meant that the South had to pay the North to do so. The cotton exhausted the soil very quickly and therefore the centre of production had to move westwards towards the Mississippi and Alabama, this expansion was encouraged by the UK. Another difference between the North and the South was that the North had realized how important education was, and therefore was giving free education even to the poor. However the South had only one school for orphans and didn't give much attention to education. Their ideas on how the government system should be run also differed. The South wanted individual states to have more power than the Federal government, but the North thought that the Federal government should be given most of the power to come to decisions for the separate states. The Mexican war in 1846 made the hostility between the North and the South even greater. ...read more.

There were also some similarities between the North and the South as well, for example both had a high code of honour. The people in the South were more respectable and had higher status if they had a lot of slaves. The North also had a high code of honour and this depended on their education and careers. Both the North and the South were also very religious and practiced their religion. Overall, I feel that the differences were very substantial between the North and the South as these differences played a part to the Civil War. The main difference was due to slavery and their opinions about it what made it more worse was that the North was strongly against slavery and the South firmly believed in it, as both sides had extreme ideologies which were completely opposite, it caused hostility. If the North felt that slavery is bad but did not interfere with the South the tension would not have been so bad. ...read more.