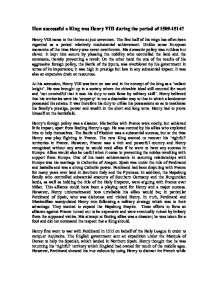 How successful a King was Henry VIII during the period of 1509-1514? Henry VIII came to the throne at just seventeen. The first half of his reign has often been regarded as a period relatively insubstantial achievement. Unlike some European monarchs of the time Henry was never overthrown. His domestic policy was ruthless but clever. It kept him secure by pleasing the nobility who controlled the land and the commons, thereby preventing a revolt. On the other hand the one of the results of his aggressive foreign policy, the Battle of the Spurs, was overblown by his government in terms of its importance; it was high in prestige but low in any substantial impact. It was also an expensive drain on resources. At his accession, Henry VIII was bent on war and in the concept of the king as a 'valiant knight'. He was brought up in a society where the chivalric ideal still counted for much and 'not unmindful that it was his duty to seek fame by military skill'. Henry believed that his territories were his 'property' in not a dissimilar way to that in which a landowner possessed his estates. It was therefore his duty to utilise his possessions so as to maximise his family's prestige, power and wealth in the short and long term. Henry had to prove himself on the battlefield. Henry's foreign policy was a disaster. ...read more.

This was highly embarrassing for King Henry, he was made to look unwise and lacking in good judgement as a King should. In 1513 he returned back to France, independent. This was a wise choice of Henry's; he was quick to learn as knew he could not trust his allies. Henry besieged the minor town of Therouanne. Henry went on to capture Tournai. This was the 'major' achievement of the campaign. Tournai held no industry or particular financial value. However, it was a famous name that would bring Henry the title or 'War Hero' that he was desperate for. Although, the amount of 'battle' which went on is debateable. Furthermore, Henry did not attend the 'battle'; he was not with the army at the time. The battle was named the Battle of the Spurs. This war had given him the military recognition he sorted after, he had led an impressive, strong army to victory. The land he had come home with would impress the nobility who would now support their King. However, the battle did not affect the French at all. They had not become weaker by the battle. The French had more important matters to attend to than fraternize with small, insignificant countries like England who was merely an irritating fly which would not go away. They let Henry keep the small villages Tournai and Therouanne to keep him content. ...read more.

He coped with these allegations decisively and cleverly, this was a major success. He knew that he needed to be popular with his subjects and keep the nobility on his side because they controlled the commons and governed parts of the country. He decided that he would he would behead Richard Empson and Edmund Dudley who were the two main hated enforcers. This was a dramatic publicity stunt. Henry showed that he respected his nobility and trusted them. It gained mass support and popularity for the new King. However, in truth Henry did not get rid of all bonds and recognisances. He kept them for subjects who he did not trust. He also kept most of his father's councillors. His success in this area brought his extra support from his nobility which is perhaps why he managed to make such blunders in France. Henry was an ideal Renaissance prince- well educated, a sportsman, and interested in music and the arts. Henry made some blunders as a young King for example his war against France. However, he never lost control of his nobility and there was never a revolt against him. By 1514 there was peace in the Tudor dynasty and they were now related to royal families of both France and Spain. The most lasting result of the war with France was the emergence of Wolsey who had proved himself to be fantastic diplomat. Henry may have made mistakes, but he came out as a strong King who was popular with his nobility, they had the War they had craved under Henry VII. ...read more.