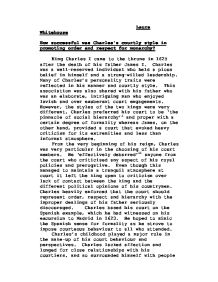 How successful was Charles's courtly style in promoting order and respect for monarchy?

Laura Whitehouse How successful was Charles's courtly style in promoting order and respect for monarchy? King Charles I came to the throne in 1625 after the death of his father James I. Charles was a well-reserved individual who held a pious belief in himself and a strong-willed leadership. Many of Charles's personality traits were reflected in his manner and courtly style. This association was also shared with his father who was an elaborate, intriguing man who enjoyed lavish and over exuberant court engagements. However, the styles of the two kings were very different, Charles preferred his court to be 'the pinnacle of social hierarchy'i and proper with a certain degree of formality whereas James, on the other hand, provided a court that evoked heavy criticism for its extremities and less than informal atmosphere. From the very beginning of his reign, Charles was very particular in the choosing of his court members. He 'effectively debarred'ii anyone from the court who criticised any aspect of his royal policies and prerogative. Even though this managed to maintain a tranquil atmosphere at court it left the king open to criticism over lack of contact between the king and the different political opinions of his countrymen. ...read more.

Charles was very specific in the choosing of his art and paintings, and even with his limited funds, still indulged in the work of certain leading European artists, Ruben and Van Dyck. The ceiling of the new Banqueting Hall in Whitehall was Ruben's work 'The Ascension' (pictured right), whilst Van Dyck painted the portraits of the royal family with 'unprecedented elegance'iii. Charles also enjoyed holding the somewhat controversial masques. These were performances of great extravagance and intricate display. They involved a company of well-trained actors who would depict certain scenes representing the stature of the king and the responsibilities associated with the role. The latter masques, composed by Inigo Jones portrayed kingship as a godly figure. The masques symbolised the court isolation and delusion. 'Charles took on roles that displayed his wisdom and justice, whilst the queen was presented as the embodiment of love and beauty.'iv The masques were deeply resented by many, some out of jealously and others simply out of disapproval because of the reinforcement of fears of Catholicism. ...read more.

The royal courtiers showed genuine loyalty to the king but this was only to enhance their own social standing through manipulation and examination of the king's wishes and weaknesses. The court became a haven away from the insecurities and distastes of the king by keeping him isolated from the serious issues threatening the present. Because of this, Charles's knowledge of current state of affairs grew dangerously limited and it was simply shameful and eventually hazardous for the king of a nation not to be interested in affairs of state. The closed selection and lack of understanding shown to Charles's adversaries proved to be one of his many personality flaws but one of the main causes of his downfall. i From A. Anderson 'Charles I', Addison Wesley Longman Limited 1998, pg 79 ii From Seel and Smith 'The Early Stuart Kings' Routledge 2001, pg 71 iii From B.Quintrell 'Charles I 1625-1640', Longman Limited 1994, pg 48 iv From Dr R. Cust 'The personality and political style of Charles I', BBC History and Monarchs, pg 3 v From A. Anderson 'Charles I', Addison Wesley Longman Limited 1998, pg 80 vi From A. Anderson 'Charles I', Addison Wesley Longman Limited 1998, pg 80 ...read more.