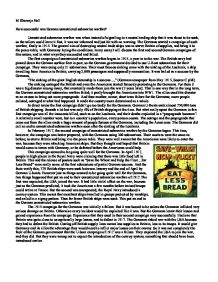 M Khawaja Hall How successful was German unrestricted submarine warfare? Unrestricted submarine warfare was when instead of signalling to a neutral trading ship that it was about to be sunk, so the sailors could leave it first, it was not informed and just hit with no warning. The Germans started a campaign of such warfare, firstly in 1915. The general aim of destroying neutral trade ships was to starve Britain of supplies, and bring it to the peace table, with Germany laying the conditions. In my essay I will discuss the first and second German campaigns of this nature, and in what ways they succeeded and failed. The first campaign of unrestricted submarine warfare began in 1915, a year in to the war. The British navy had pinned down the German surface fleet in port, so the German government decided to use U-Boat submarines for their campaign. They were using only 21 submarines. ...read more.

But what really upset the Germans in this first campaign was all the innocents killed, such as on the Lusitania, and their deaths exploited in a "propaganda bonanza". A relatively small number were, but to a country's population, every person counts. The outrage and the propaganda that came out from the allies made a huge amount of people furious at the Germans, including the Americans. The Germans did call an end to unrestricted submarine warfare soon after the sinking of the Lusitania. In February 1917, the second campaign of unrestricted submarine warfare by the Germans began. This time, however, the campaign was better prepared, with the Germans using 300 submarines. Their motives were the same as before; to starve Britain and bring it to the peace table. They were well aware that the Americans were likely to enter the war, because they were attacking American ships. But they thought and hoped that Britain would come to terms with Germany, or be defeated before the Americans could help. ...read more.

Thus far fewer British ships were sunk. This put an end to the German unrestricted submarine warfare. The 1915 campaign for the Germans was initially a failure. But it was bound to be unless the Germans inflicted very serious damage on Britain. Otherwise every incident would be exploited like it was. But the Germans learnt their lesson and gained experience from the campaign. Experience that they used in their second campaign very successfully. I believe that Britain was quite close to exceptionally large losses, and to defeat in 1917. The Germans risked war with the USA because they had to defeat the British. Cutting off British supply lines meant less supplies to Britain, less to its troops. It would give Germany and its allies the advantage they would need to inflict major losses on their enemy. So it was not completely the fault of the German government that the U-boat campaign of 1917 was a failure. They expected the USA to join the war, and they did. But they were wrong not to expect the introduction of the convoy system, something that should have been introduced earlier. ...read more.