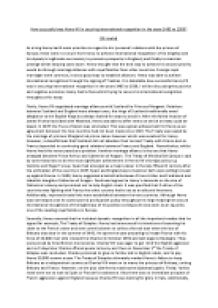 How successful was Henry VII in securing international recognition in the years 1485 to 1509?

﻿How successful was Henry VII in securing international recognition in the years 1485 to 1509? (24 marks) As a king Henry had 4 main priorities in regard to his ?personal? relations with the princes of Europe, these were: to secure his throne; to achieve international recognition of his kingship and his dynasty?s legitimate succession; to promote prosperity in England; and finally to maintain prestige whilst keeping costs down. Henry thought that the best way to achieve his second priority would be through marriage alliances with royal families from other countries. Foreign royal marriages were common; it was a good way to establish alliances. Henry was able to achieve international recognition through the signing of Treaties. It is debatable how successful Henry VII was in securing international recognition in the years 1485 to 1509, I will be discussing the positive and negative outcomes Henry had to face whilst trying to secure his international recognition throughout this essay. Firstly, Henry VII negotiated marriage alliances with Scotland for Princess Margaret. Relations between Scotland and England were always tense, the kings of Scotland traditionally owed allegiance to the English Kings but always looked for ways to avoid it. After the failed invasion of James IV who had sided with Warbeck, Henry was able to offer terms on which a treaty could be based. ...read more.

He spent the year preparing to invade France with his force of 26,000 men who crossed the Channel in October 1492 and laid siege to Boulogne. They were joined by hired Breton mercenaries. Charles VIII was eager to get rid of his English aggressor and so 9 days later Charles offered peace to Henry and then on November 3rd the Treaty of Estaples was concluded. Charles promised to give no further aid to English rebels, and to pay Henry 50,000 crowns a year. The Treaty of Estaples ultimately marked Henry?s failure to keep Brittany as a independent country as Charles VIII went on to marry the princess of Brittany, uniting Brittany and France. However, on the plus side Henry made some diplomatic gains. Firstly, Yorkist rivals were not to look to Spain or France for assistance. Also there was no immediate prospect of French aggression against England because Charles VIII was looking for glory in Italy. Additionally, Henry was accepted as an equal by the Kings of France and Spain and by the Holy Roman Empire. Overall Henry must have felt some satisfaction when viewing the international situation at the end of 1492. Henry here achieved some of his main priorities and importantly achieved more international recognition. ...read more.

However Louis XII decided not to jeopardise his understanding with Ferdinand over Italy and so he bribed the Spanish king to join him. Therefore when The League of Cambrai was signed in 1508 it was an alliance against Venice, between the Pope, Louis XII, Maximillian, the Archduke Charles and Ferdinand. In the end it was Henry who was left isolated by this alliance. It can be argued that it had an advantage of turning Europe?s attention away from England at a time when Henry VII was nearing the end of his life. Never the less there was still a danger that the focus of the alliance might move to an anti-Tudor position. Overall, Henry was successful in securing international recognition but only to a certain extent. Henry was very successful in securing his international recognition mainly towards the start of his reign, for example with the signing of Treaties such as, the Truce of Ayton and the Treaty of Medina del Campo. However, from 1502 onwards Henry faced a series of deaths which caused his international recognition to be undermined and he also found himself isolated, so for this reason his success was limited. Henry VII struggled to determine international relations and secure his dynastic recognition ultimately causing his relationships to fluctuate over the years and in the end his success of this priority was limited. ...read more.