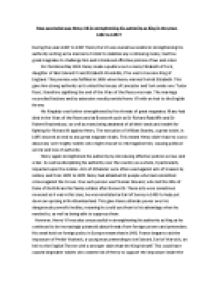 How successful was Henry VII in strengthening his authority as King in the years 1487 to 1497?

﻿How successful was Henry VII in strengthening his authority as King in the years 1487 to 1497? During the years 1487 to 1497 Henry the VII was overall successful in strengthening his authority as King as he married a Yorkist to stabilize any continuing rivalry, had few great magnates to challenge him and introduced effective policies of law and order. On Christmas Day 1484 Henry made a public vow to marry Elizabeth of York, daughter of late Edward IV and Elizabeth Woodville, if he was to become King of England. This promise was fulfilled in 1486 when Henry married Yorkist Elizabeth. This gave him strong authority as it united the houses of Lancaster and York under one 'Tudor Rose', therefore signifying the end of the Wars of the Roses was near. The marriage reconciled factions and by extension would provide Henry VII with an heir to the English throne. ...read more.

One such person was Thomas Howard, who lost the title of Duke of Norfolk and his family estates after Bosworth. These acts were sometimes reversed as it was in this case, he was reinstated as Earl of Surrey in 1489 to help put down an uprising in Northumberland. This gave Henry ultimate power over his dangerously powerful nobles, meaning he could use them to his advantage when he needed to, as well as being able to suppress them. However, Henry VII was also unsuccessful in strengthening his authority as King as he continued to be increasingly paranoid about threats from foreign powers and pretenders. His weak hold on foreign policy in Europe meant that in 1491 France began to aid the imposture of Perkin Warbeck, a young man pretending to be Edward, Earl of Warwick, an heir to the English Throne with a stronger claim than the King himself. ...read more.

Maximilian's troops did not materialise and Henry was left to tackle the French single handedly, making him look weak to the all powerful Spain, of whom his son was to marry the Spanish King's daughter. This made King Ferdinand wary of whether to loose his valuable daughter to such an insignificant country when she could be married to form greater foreign policy with other European powers. This weakened Henry's authority as he was at mercy of the events in Europe, not controlling them for his own gains. In conclusion, Henry was overall successful in strengthening his authority as a king during the years 1487 to 1497, but mishaps plagued him along the way which could have easily crumbled his authority such as loss of major noble support. If Henry had eventually lost the marriage alliance between Spain this could have altered his position in Europe negatively and made him a target for usurption and impostures. Despite these threats, he swiftly had tight hold of authority as King of England. ...read more.