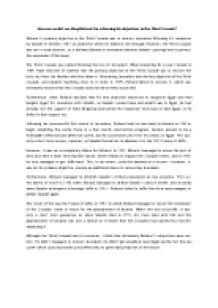 How successful was King Richard I in achieving his objectives in the Third Crusade?

Following the unsuccessful first march to Jerusalem, Richard took his men back to Ascalon in 1192 to begin rebuilding the castle there in a four month construction program. Ascalon proved to be a formidable offensive and defensive castle, and he could have used it for his attack on Egypt. This was only a short term success, however, as Saladin forced him to abandon it in the 1193 Treaty of Jaffa. However, it was not a completely failure for Richard. In 1191, Richard I managed to secure the port of Acre and take it back from Muslims hands, which helped to expand the Crusader states, and in 1192 he also managed to get Jaffa back. ...read more.

The result of this was the Treaty of Jaffa, in 1193, in which Richard managed to secure the remainder of the Crusader states in return for the abandonment of Ascalon. Whilst this was successful, it was only a short term guarantee as when Saladin died in 1193, his truce died with him and the abandonment of Ascalon was also a failure as it meant that the Crusaders had wasted four months rebuilding it. Although the Third Crusade had its successes, I think that ultimately Richard I?s objectives were not met. He didn?t managed to recover Jerusalem, he didn?t get anywhere near Egypt and he lost the one castle which could have been used offensively to potentially help him in the future. ...read more.