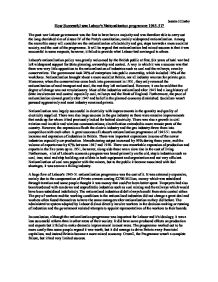 How successful was labours' nationalisation programme 1945 - 1951?

Jasmin Hillerby How Successful was Labour's Nationalisation programme 1945-51? The post-war Labour government was the first to have have a majority and was therefore able to carry out the long cherished aim of clause IV of the Party's constitution; mainly widespread nationalisation. Among the areas this essay will consider are the nationalisation of electricity and gas, steps towards a more socialist society, and the cost of the programme. It will be argued that nationalisation had mixed success in that it was successful in some respects, however, it failed to provide what Labour had envisaged in others. Labour's nationalisation policy was greatly welcomed by the British public at first, Six years of total war had left widespread support for State planning, ownership and control. A way in which it was a success was that there was very little opposition to the nationalisation of industries such as coal and the railways, even by conservatives. ...read more.

There was also large success in the gas industry as there were massive improvements that made up for where it had previously lacked far behind electricity. There was also a growth in civil aviation and in cable and wireless communications; electrification extended to more remote parts of the country. However, the expansion of both the electric industry and the gas industry threw them into competition with each other. A great success of Labour's nationalisation programme of 1945-51 was the increase and expansion of industries in Britain. There was important expansions in some of the newer industries especially car production. Manufacturing output increased by 50% during these years, and the volume of exports rose by 67% between 1947 and 1950. There was remarkable expansion of production and exports in the five years up to 1951, however, along side these was a slow rise in the cost of living. ...read more.

The pay of workers and the working conditions in the nationalised industries did not change a great deal and workers often found themselves to have the same managers after nationalisation as they did before. The administrative system adopted by Labour did not directly involve workers in the decision making or running of industries and the government resisted attempts to appoint representatives of the workers to their boards. In conclusion, although the nationalisation programme was important for Labour and it's ideology, it was a less successful reform than in other areas of their society. It did have some profound effects on production and exports but it failed to make dramatic improvement in most areas. The programme worked out to be more costly than some people argued it was worth, but it did manage to drive Britain away from total capitalism, and instead Britain became a more mixed economy. Overall, the Programme wasn't a complete failure, but it had very limited success. ...read more.