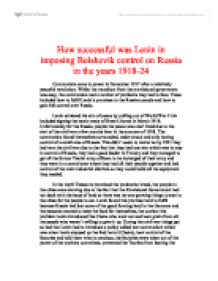 How Successful Was Lenin In Imposing Bolshevik Control On Russia In the Years 1918-24?

How successful was Lenin in imposing Bolshevik control on Russia in the years 1918-24 Communists came to power in November 1917 after a relatively peaceful revolution. Whilst the transition from the provisional government was easy, the communists had a number of problems they had to face. These included how to fulfil Lenin's promises to the Russian people and how to gain full control over Russia. Lenin achieved his aim of peace by pulling out of World War I this included signing the harsh treaty of Brest-Litovsk in March 1918. Unfortunately for the Russia, people the peace was short lived due to the start of the civil war a few months later in the summer of 1918. The communists found themselves surrounded, under attack and only having control of a small area of Russia. This didn't seem to matter as by 1921 they had won the civil war due to the fact that they had one aim which was to stay in control of Russia, they had a good leader in Trotsky and they managed to get all the former Tsarist army officers to be incharged of their army and they were in ...read more.

When Lenin realised that war communism wasn't working he decided to change to the New Economic policy (NEP) this brought an end to grain requisitioning but the peasants would give a certain amount of grain to the government as tax and they could sell the surplus on the open market. Also traders could buy and sell goods which had been illegal during war communism. The smaller factories were allowed to sell their goods for a profit, some larger industry remained in state control but some were allowed to sell their products to make a profit. The electrification of Russia, Lenin believed that this would bring forward industry. Whilst the NEP was around some of the production levels had risen to pre 1914 levels. In the April Theses Lenin promised to give the land back to the peasants to do this the Bolsheviks issued a decree which took all the land away from the Land owners and be given to the peasants who would form comitees to divide the land up fairly. Lenin used posters as a from of propaganda to get people interested in his ideas for example posters showing men and women working together as it was a communist ideal that everyone was equal. ...read more.

It was a good idea for Lenin to fulfil all his promises so the people could see that he was an honest man and they could start to trust him. Lenin used ruthless methods to control the population but he felt that it was the only way to have full control of the country, an example of this was when he closed down the constituent assembly, he did this because he felt that the socialist revolutionaries were a real threat to his then fragile hold on power. When Lenin introduced the NEP he had not lost his communist ideals but felt that war communism wasn't working so he had to change his ways otherwise the whole economy of Russia would collapse completely. His idea worked and industrial production was up the pre 1914 levels, also under the NEP the peasants were producing more grain than before so people were not going hungry. I also believe that Lenin's focus on education and equality for women made him popular with the people. Unfortunately when there is a winner there must be a loser in this case the losers were the people killed or tortured when they spoke out against Lenin or fighting in the civil war. ...read more.