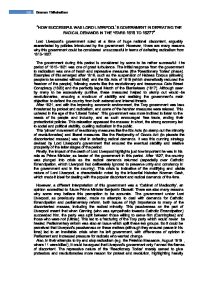 How successful was Lord Liverpools government in defeating the radical demands in the years 1815 to 1827?

"HOW SUCCESSFUL WAS LORD LIVERPOOL'S GOVERNMENT IN DEFEATING THE RADICAL DEMANDS IN THE YEARS 1815 TO 1827?" Lord Liverpool's government ruled at a time of huge national discontent, arguably exacerbated by policies introduced by the government. However, there are many reasons why this government could be considered unsuccessful in terms of defeating radicalism from 1815-1827. The government during this period is considered by some to be rather successful: the period of 1815-1821 was one of great turbulence. The initial response from the government to radicalism was one of harsh and repressive measures (the 'Reactionary Tories' phase). Examples of this emerged after 1816, such as the suspension of Habeas Corpus (allowing people to be arrested without trial) and the Six Acts of 1819 (which dramatically reduced the freedom of the people), following events like the revolutionary and treasonous Cato Street Conspiracy (1820) and the perfectly legal March of the Blanketeers (1817). Although seen by many to be excessively punitive, these measured helped to stamp out would-be revolutionaries, ensuring a modicum of stability and realising the government's main objective: to defend the country from both external and internal threats. ...read more.

However, a different interpretation of this government was a 'Cabinet of Mediocrity', an opinion accredited to future Prime Minister Benjamin Disraeli. There are also many reasons why some may believe this perception to be accurate. The government under Lord Liverpool, as previously stated, made no attempts to deal with demands for Catholic Emancipation and parliamentary reform, both issues of high importance to many of the discontented masses, including the radical minority. This passiveness on the part of Liverpool meant that when Canning (who was sympathetic towards Catholic Emancipation) succeeded him, the party was split between those willing to serve him (Canningites) and those who were not (Ultras). This led to a fracturing of the Tory party which would never be healed. Parliamentary reform was also an issue which split these two groups. So it could be perceived that Liverpool's passiveness on these matters (although they ensured peace in his time) led to an inevitable crisis when he left government, with differences of opinion in Parliament and increased pressure for radicals who wanted change. ...read more.

Hence, they did not act much differently to the repressive 'Reactionary' government, meaning that the government did not have much success in the 'Liberal' period in quashing radicalism. In summary, the government of Lord Liverpool was, in the main, rather ineffective in stamping out the threat of radicalism. Lord Liverpool ignored major issues such as parliamentary reform and Catholic Emancipation, simply putting them to one side, until they resurfaced with a vengeance and radical demands thundered back. Furthermore, the heavy-handed nature of his government only served to increase popular discontent rather than stop it, and the continuity of the same individuals during both the 'Reactionary' and 'Liberal' period meant that there was actually no change, merely a new label on an old product. The government also got rather lucky that the economy turned for the better, as their protectionist class legislation (e.g. the Corn Laws) were the cause for widespread discontent, and the improved economy was nothing to do with them. ?? ?? ?? ?? ...read more.