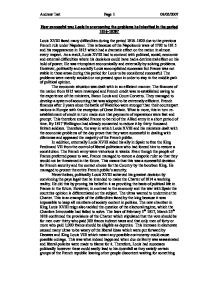 How successful was Louis in overcoming the problems he inherited in the period 1816-1820? Louis XVIII faced many difficulties during the period 1816-1820 due to the previous French rule under Napoleon. This is because of the Napoleonic wars of 1792 to 1815 and his reappearance in 1815 which had a dramatic effect on the nation in almost every respect. As a result, Louis XVIII had to contend with political, social, economic and external difficulties where his decisions could have had a detrimental effect on his hold of power. He was triumphant economically and externally by solving problems. However, politically and socially Louis accomplished successes but France was not stable in these areas during this period for Louis to be considered successful. The problems were merely avoided or not pressed upon in order to stay in the middle path of political opinion. The economic situation was dealt with in an efficient manner. The finances of the nation from 1815 were revamped and French credit was re-established owing to the experience of the ministers, Baron Louis and Count Corvetto. ...read more.

This means that this was a successful decision for French security and the correct choice for the Country by the bourbon King. He managed to protect the entire French public's security. Nevertheless, politically Louis XVIII achieved his greatest decision by convincing the pays legal that he intended to make the Charter of 1814 a working reality. He did this by proving his belief in it as providing the basis of political life in France in the future. However, in contrast to the economy and the war with Spain the countries opinion is differentiated on the subject. The ultras wanted to undermine the Charter. This is an example of the difficulties faced by the king because it was impossible to keep all members of society content in politics. The new chamber in King Louis XVIII reign also tackled the question of the electoral regime, which the Chambre Introuvable had failed to solve. The laws of February 5th 1817, March 25th 1818 confirmed the provisions of the Charter which stipulated that the vote should be for men over thirty who paid 300 francs indirect taxes and that only men of forty or more who paid 1,000 francs should be eligible as deputies. ...read more.

Newspapers were therefore reserved for all who were able to vote and presumed to be educated. Decazes and King Louis XVIII also abolished censorship. This liberal attitude benefited the middle classes of the French society however the ultras including Richelieu wanted a revision of the electoral law and rapprochement with the Ultras. This is one other example of the apparent successes of the liberal approach which Louis adopted. However, this only causes governments and the public to be torn in two directions while the king remains in the middle of the problem which means he leaves himself isolated and open to criticism when a problem arises. In conclusion, Louis XVIII was successful in dealing with economic and external problems because this did not affect any different factions; it was a benefit for the whole nation. Nevertheless, politically and socially it was impossible to overcome these problems entirely because there were many separate groups who shared distinct opinions. This was impossible for all appease to be appeased so it was impossible to completely overcome the problem. ?? ?? ?? ?? Andrew Tait Page 1 08/05/2007 ...read more.