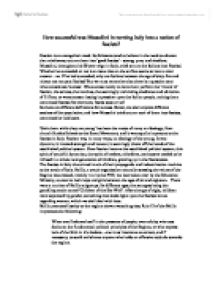 How successful was Mussolini in turning Italy into a nation of fascists?

How successful was Mussolini in turning Italy into a nation of fascists? Fascism is an evangelical creed. Its followers tend to believe in the need to educate the unbelievers, to turn them into 'good fascists' - strong, pure, and obedient. Mussolini, throughout his 20 year reign in Italy, tried to turn the Italians into Fascisti. Whether he succeeded or not is an issue that on the surface seems to have a clear answer - no. If he had succeeded, why are Italians between the age of sixty-five and ninety not rampant fascists? But we must remember that there is a question as to what constitutes 'success'. Was success merely to have them perform the 'rituals' of fascism, the salutes, the marches, the seemingly unthinking obedience and adulation of Il Duce, or was success a lasting impression upon the Italian people, making them committed fascists for evermore, fascist state or no? So there are different definitions for success. Below, we shall explore different sections of the population, and how Mussolini tried to turn each of them into fascists, committed or lacklustre. 'Grab them while they are young' has been the motto of many an ideology, from church Sunday Schools to the Scout Movement, and it was equally important to the fascists in Italy. Fascism was, in many ways, an ideology of the young. It was dynamic, it invoked strength and honour; it seemingly threw off the bonds of the established political system. ...read more.

The treatment of women was much as one would expect from a regime such as the Mussolini Regime. It focused heavily on the role of women in the home, the need for childbearing and rearing, and the natural superiority of the male half of the species, who undertook all the 'important' work - fighting, and building a great Italy. On this issue, the Catholic Church was, for once, completely in line with the fascists. The fascist ideals of the homemaking wife were ones the Church had been force-feeding the faithful for centuries. To this end, the fascists prescribed women a certain way of life fairly strictly. On the employment front, Women were excluded from all but 10% of state provided employment, and in 1938, the measure was extended to much of the private sector. Yet in order to protect women from having to sacrifice their breeding roles, the regime did pass laws protecting women at work. Many teaching positions were not to be taken by women, such as teaching Latin, Philosophy, or History. Perversely, it seems, there were more women in University in 1938 than before the regime came to power, despite attention being paid to rearing them for housekeeping and breeding duties lower down in the school system. Politically, ordinary women were on a par with ordinary men - they had little rights and were expected to follow the fascist creed as much as men, although in their case the creed was a little different. ...read more.

Despite later disagreements - the 1931 encyclical and the 1938 criticism of the states anti-semitism being the major ones - the relationship between the Church and the state had been ameliorated a great deal by Mussolini, effectively ending a problem that had plagued Italy since it's conception as a modern state. But how much did Catholics follow their leaders in becoming accepting of the fascist regime, or indeed to become committed fascists? As the Historian Clark puts it, The Catholic Church was the greatest obstacle to any 'totalitarian' regime in Italy. All the others, Parliament, the press, opposition parties, unions, could be smashed or emasculated, but not the Church. So the Church still had a major influence over the Italian people, and Catholics could not become true fascists whilst remaining true, or even to an extent partial, Catholics. In summation, it seems that Mussolini failed in our first definition of success. All Italians were not raving fascists, committed to die for the regime, and the Duce. This was proven later on by the suspicious absence of Italians who threw themselves upon their swords upon the Allied Liberation. But on our second definition, he may have succeeded somewhat more than on the first. The People did show at least perfunctory fascist values, and did not rise up against Mussolini, and the main aim of Mussolini's politics was preserved - namely the preservation of Mussolini's political life. ...read more.