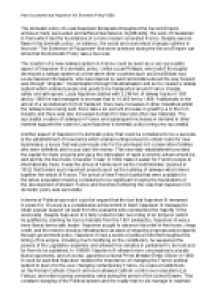 ﻿How Successful was Napoleon III?s Domestic Policy? (50) The domestic policy of Louis Napoleon Bonaparte throughout the Second Empire achieved many succeeded and suffered few failures. Significantly, the work of Haussman in Paris which laid the foundations of a more modern renovated France. Despite several flaws in his domestic policy, on balance, the social and economical changes outlined in his book ?The Extinction of Pauperism? that were acheived during the Second Empire can show that his Domestic Policy was a Success. The creation of a new railways system in France could be seen as a very successful aspect of Napoleon III?s domestic policy. Unlike Louis-Phillippe, who hadn't thoroughly developed a railway system at a time when other countries such as Great Britain had, Louis-Napoleon Bonaparte, who was inspired by saint simonists believed the way forward was through ?dirigiste?, modernisation through industrialisation and so he created a railway system which enabled people and goods to be transported around France cheaply, safely and with speed. Louis Napoleon started with 3,248 km of railway tracks in 1851 and by 1869 he had managed to increase that to 16,465 km by 1869. ...read more.

Napoleon sought to advance his belief in free trade, cheap credit, and the need to develop Infrastructure as ways of ensuring progress and prosperity through government policy. Napoleon III had a series of political reforms throughout the timing of his empire, including much modifying on the constitution, he weakened the powers of the Legislative assembly and allowed free debates in parliament to be held and for them to be published. In 1860/61 Napoleon III allowed more concessions to placate liberal opponents, and of course, appointed a liberal Prime Minister Émile Ollivier in 1869. It could be said that Napoleon realised the importance of changing the French political system to liken it to the ever changing contemporary France, he reduced restrictions on the Roman Catholic Church and even allowed Catholic control over education (Loï Falloux) and relaxed press censorship rules during the period of the Liberal Empire. This constant changing of the Political system and the reality that he did manage to maintain a support base all gives evidence to the case that Napoleon III’s domestic policy was a success. Arguably the most important factor that supports the case for Napoleon III’s domestic policy being a success is the rebuilding of the whole of Paris, the work of Haussman which rapidly modernised the whole of France. ...read more.

Critics support the statement with examples such as the rescuing of the Crédit Mobilier in 1867 and the failure of the sewage system in Baron H’s renovated France, the sewers couldn't take “night soil” and so it still had to be carted away, a fundamental flaw in such a prominent project. Critics also argue that Napoleon III failed as economic woes increased in the late 1860’s and that if his Domestic policy was truly very successful then he would have lasted much longer than 18 years. Despite the overall success of the Domestic Policy of Louis-Napoleon Bonaparte, these failures must be taken into account when evaluating how successful it was. In conclusion, The Domestic Policy of Louis-Napoleon Bonaparte can be viewed as successful. Despite several lapses such as the rescuing of the Crédit Mobilier, the Domestic Policy provided many projects which positively contributed towards the rapid economic and social development of France. The building of the railways and renovation of Paris under Baron H proved to be very beneficial for a new France and Louis-Napoleon Bonaparte made appropriate political decisions and concessions in order to appease the electorate and maintain a strong supportive base, thus concluding that Louis-Napoleon Bonaparte’s domestic was overall a success as the benefits overruled the lapses made in the process. ...read more.